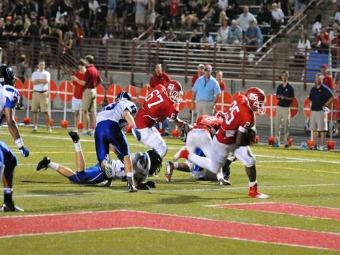 Peyton Barber certainly knows how to shine when the lights are brightest. Last Friday night with Milton taking on Roswell on the GPB.org webcast, Barber rushed for more than 260 yards while racking up two scores, with a third being wiped away due to a penalty. The Ole Miss pledge was a force that stood out from teammate Treyvon Paulk and Roswell’s Andrew Kwateng, the other two star running backs from the contest. Between Barber and Carl Lawson, Milton had a superstar on the field at all times. West Forsyth’s A.J. Erdely also stood out last week in a win over Alpharetta. The future Middle Tennessee State quarterback racked up 348 total yards last week and has 668 passing yards and 390 rushing yards on the year with 10 combined scores. Heys McMath had a bit of a rough patch in his first week on the list, completing just 18-of-28 for 172 yards with one score and an interception. McMath’s Savannah Country Day fell to Johnson County.