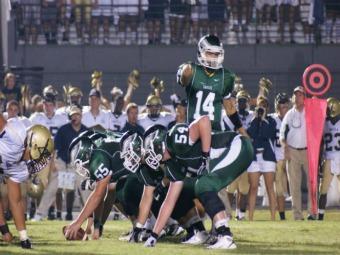 The Collins Hill Eagles reached the state semifinals in 2010, Kevin Reach's first year at the helm at the Suwanee school. The offense rode on the back of record-breaker Taylor Heinicke before falling to Brookwood in the semifinals. Current Eagles quarterback Brett Sheehan has Eagles Nation now dreaming of taking it one step further and appearing in a state championship game. In Collins Hill's last game against Habersham Central, Sheehan was 22-for-25 for 275 yards and three scores while also scampering for a score in a 52-0 rout.

Sheehan, who has committed to Florida International University, has found Julian Williams, Grant McDonald and Justin Wyatt with regularity this season as Collins Hill is 2-1 with Mountain View visiting on Sept. 28. Sheehan passed for 300 yards in a win over Dacula after amassing nearly 250 total yards against Central Gwinnett. Christian Harris provides plenty of push on the offensive line, which has plenty of experience for Reach.

Defensively, Wyatt and Daniel Fish lead the charge and look to stretch the Eagles' shutout streak. Raymere Thomas and Rhyan England are two other players Reach credits as integral parts of the defense.

Mitchell Blanchard is also a weapon in both the kicking and punting games. He kicked Collins Hill past Dacula with late field goal, just as he did in the 2010 playoffs against Lowndes.

Mountain View is in just its third true varsity season and first with coach Doug Giacone after Tim Hardy departed for Greater Atlanta Christian. The Bears have had to overcome injuries while picking up a new system under Giacone, the team's former defensive coordinator. The defense was dominating in a 14-3 win over Pebblebrook as the Bears allowed just 129 yards in the victory. The Bears can force turnovers as they rang up four against Pebblebrook. Coleton Brindle and William Tuider each racked up 15 tackles in a loss to Mill Creek and Tuider is also a force on special teams after blocking a punt against the Falcons.

Offensively, Marvin Elam is a player to watch for at running back. He had a pair of scores after the first two games of the season. Chris Bartlett anchors the team's new triple-option offense, which has rebounded after a shaky first game against Archer.