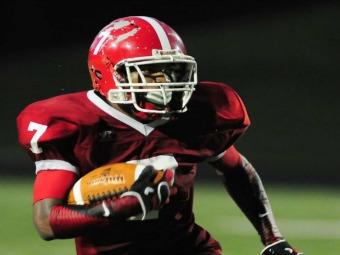 Cameron Sutton did a bit of everything for Jonesboro as the Cardinals fell just short of knocking off Griffin last week. He took handoffs, played quarterback in the wildcat formation, notched a two-point conversion, hauled in a touchdown reception and intercepted a pass. The future Tennessee Volunteer is ranked as the No. 54 cornerback prospect in the nation by Scout.com while 247sports has him as the No. 50 player in Georgia and No. 39 athlete in the country. Savannah Country Day’s Hey McMath also makes an appearance on the Score 44 after transferring down to the Georgia school for his senior season from Virginia. The 6-foot-5 specimen accounted for five touchdowns against Wheeler County, two through the air and three on the ground and has several ACC powers interested. Meanwhile, Marqui Hawkins and the Carver-Columbus offense were completely shut down by Colquitt County last week as the Packers held the Tigers to just 124 total yards.