Star Quarterbacks To Square Off Friday 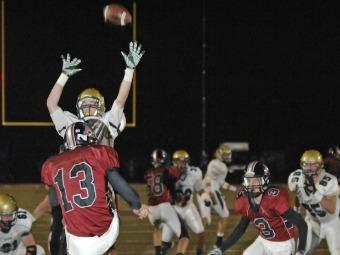 The Alpharetta Raiders posted a clean 6-0 mark last year in Region 6-AAAAA play, while the West Forsyth Wolverines managed a 5-1 mark with the lone loss coming at the hands of Alpharetta. The Wolverines entered the showdown at Alpharetta 5-0 only to fall 27-14. This year, Frank Hepler's squad hopes to avoid a repeat of history and take down Jason Dukes' squad to win the first-ever Region 6-AAAAAA crown.

"A.J. is very gifted physically, and we knew that when he first walked onto our campus," said assistant coach Adam Clack.

Erdely accounted for 176 yards in the season-opening win against Gainesville while also throwing for two scores. He racked up 260 yards against Flowery Branch.

Jake Wieczorek joins Erdely in the backfield and can turn in a big play at any moment. Last season, Wieczorek recorded three scores in less than five minutes in one game. He ran for 98 yards and a score against Gainesville earlier this year, though he had to leave the Flowery Branch game with a back injury.

"We definitely want him to get his touches," said Clack.

If Wieczorek cannot go against Alpharetta, Erdely has other weapons in the passing game with tight end Ty Anderson and receiver Tanner Bridges on the outside.

Defensively, the Wolverines are led by Bret Anderson and Josh Davis on the line. Mohamed Camara (South Carolina) and Conner Vandenbos offer a nice punch from the linebacker position while Jacob Hill anchors the secondary.

Alpharetta (1-2) has a dual-threat quarterback of its own in Josh Dobbs. The future Arizona State Sun Devil passed for 326 yards and one score while running for two more in a 38-9 win over Harrison. Dobbs has Carlos Burse, Daniel Clements and Rodney Morris on the outside to help with the offensive attack. The Raiders put up 28 points in a loss to Milton to open the season, but allowed 430 yards on the ground. The defense stepped up against Harrison, limiting the Hoyas to just 121 total yards.

In this battle of the quarterbacks, it may be which defensive quarterback steps up and makes the most plays to stop the opposition. Look for Camara and Alpharetta's Naim Mustafaa to play a major role in this game's outcome.