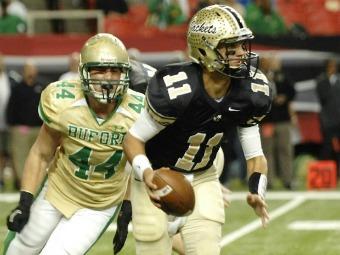 Calhoun and Grayson currently share the state’s longest winning streak after each program posted an undefeated 2011 en route to a state title. The Yellow Jackets and the Rams have each won their first two games of 2012 and each is ranked No. 1 in their respective polls. The Class AA No. 1 Yellow Jackets face a tall task tonight as the Class AAAA No. 6 Carrollton Trojans visit Phil Reeve Stadium.

Hal Lamb’s Yellow Jackets have plenty of offensive firepower back from last season as quarterback Taylor Lamb has passed for 525 yards and a spot on the Score 44 list. Against Dalton, Lamb accounted for four scores while Alex Urbano tallied three touchdowns as Calhoun rallied from a 34-24 hole to prevail 55-41. Lamb also rallied Calhoun past Ridgeland, scoring in the final minute on a 68-yard drive to win 42-35. The South Alabama pledge passed for a pair of scores and 280 yards in the win.

When Lamb looks to the air, Josh Barnes is usually the target as the all-state receiver hauled in eight passes for 94 yards against Ridgeland.

Carrollton has to be encouraged that the Calhoun defense has not played as well as its offense has this season. The last team to allow 76 points over two games yet still come away with a pair of wins was Calhoun during the 2009 playoffs. Carrollton’s rushing attack could certainly threaten the scoreboard early and often. Jarvis Terrell rushed for 105 yards and a pair of scores as the Wing-T attack put up 42 points in a win over Chapel Hill. The team rushed for 409 yards and five different backs had at least one score. The offense gained a total of 491 yards, meaning the passing attack has been lacking thus far this season.

Carrollton quarterbacks have completed just five passes for 82 yards, and the Trojans managed just 174 total yards in a loss to Oxford (Ala.) to open the year. Carrollton could not hold on to a 17-7 halftime lead in the 21-17 defeat.

This game will likely come down to which defense takes the other team’s weapons away first. Whichever offense blinks first will likely fall in what figures to be a shootout. Carrollton has won five of the six all-time meetings between the two schools, but they have not played since the mid-1980s.