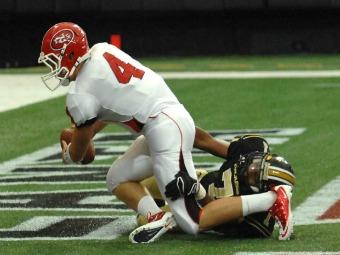 The biggest shakeup of a classification in recent memory happened over the weekend when six of the top 10 teams in Class A lost, including the top three teams. The new No. 1 team, Aquinas, ascended to No. 1 with a 2-0 record after beating George Walton Academy 28-21 in overtime. ELCA moved up to No. 2 with a victory over previously-ranked Clinch County. Wilcox County, Lincoln County and ECI round out the top five. Defending Class A champion Savannah Christian dropped out of the rankings after falling to 0-2.

In Class AA, Calhoun and Cook remain at the top of the rankings while Early County, Lamar County and Heard County check in at No. 8, No. 9 and No. 10, respectively. Heard County defeated Chattooga 47-12 over the weekend to move into the poll.

Class AAA saw a shakeup as well as former No. 2 Buford dropped to No. 5 following a rare home loss to Class AAAAA No. 8 Gainesville. Peach County, Carver-Columbus, St. Pius X and Washington County sit ahead of Buford. WaCo defeated ECI 48-22 to earn its place at No. 4 while St. Pius X dominated No. 10 North Oconee.

Three of the top five teams in Class AAAA also tasted defeat over the weekend. Cairo fell to Bainbridge by a field goal and Marist lost at home to Class AAAAA No. 9 Thomas County Central. Sandy Creek still sits at No. 1, followed by Statesboro, Grady, Stephens County and Griffin. Carrollton checks in at No. 6 and will face Class AA No. 1 Calhoun this Friday on the GPB.org game of the week.

Class AAAAA didn’t see a lot of movement as most of the top teams won. Thomas County Central moved up one spot and Ware County took Jenkins’ spot after a nice win against Charlton County.

Finally, North Gwinnett, despite an off week, moved up to No. 5 and will face the new No. 7 Norcross this Friday on the GPB-TV game of the week. Lowndes moved up to No. 6 after a 31-0 victory. Valdosta dropped out of the rankings following a loss to Brooks County. Colquitt County sits one spot ahead of Lovejoy, a team the Packers defeated Friday.