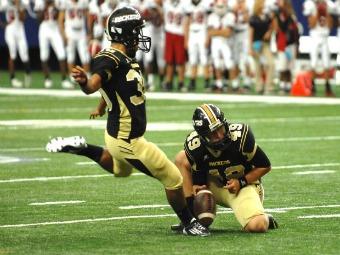 Despite an upset loss to North Gwinnett to start the season, Colquitt County proved what many thought before the season - they are a serious contender for a state championship. The Packers stymied a talented Lovejoy offense in beating the No. 5 Wildcats 14-7 in Moultrie. Rush Propst's crew will now host Class AAA power Carver-Columbus Friday in yet another high-profile non-region game.

Look at Wheeler go! The Wildcats, a perennial playoff team in the 80s and 90s, have started out 2-0 with wins over east Cobb neighbors Sprayberry and Pope. The 33-0 win over the Greyhounds Friday was especially impressive, as the Wildcats dominated a playoff contender from Class AAAAA. In an unbalanced Region 5-AAAAAA, look for the Wildcats to contend for a playoff bid behind top 10 teams Walton and Lassiter. It would be Wheeler's first playoff appearance since 2006.

Bainbridge impressed by upsetting Cairo 17-14 Friday night. After getting taken to the woodshed by East Gadsden (Fla.) in the season opener, it didn't look like the Bearcats had much this season. But the win over the highly-ranked Syrupmakers proved Bainbridge can do some damage in Class AAAAA.

Lambert, in its fourth year of existence, is knocking on the door of being ranked in the state's largest classification. After a 19-17 win over Roswell, the Longhorns are 2-0 with wins over Etowah and the Hornets. Coach Sid Maxwell's squad faces Northview Friday before beginning its Region 6-AAAAAA slate.

The Kell-Lassiter game is looking like a juicy affair in Cobb County this Friday. The Longhorns are ranked No. 4 in Class AAAAA while the Trojans are ranked No. 3 in Class AAAAAA. Kell's defense looked solid in wins over Chattahochee and Woodstock and the Horns have been known to play well against foes from the state's largest classification in coach Derek Cook's tenure. Lassiter, meanwhile, is one of the most talented squads in the state with UCLA-commit Eddie Printz at QB and a dynamic and deep wide receiving corps. Can Brendan Langley and the Kell defense slow down Printz and Lassiter? Should be an intriguing game Friday at Lassiter.