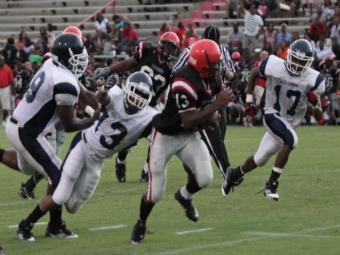 Week 3 of the Georgia high school football season features plenty of action with many teams engaging in a final tuneup before beginning region play in the next week or two. Brookwood faces Mill Creek in a battle of Gwinnett playoff teams from one year ago. The Broncos have not played since falling to Walton in the Metro PCS Corky Kell Classic while Mill Creek is coming off a 35-0 win over Dacula. Clarke Central and Central Gwinnett will meet as the Gladiators face a metro Atlanta team for the second time in as many weeks. Marist defeated Clarke Central last week. Ware County meets Charlton County as a pair of south Georgia powers tango. The Gators will face a Charlton County team ranked No. 5 in Class A.

In the northwest corner of the state, Calhoun faces the Catamounts of Dalton in a rivalry that dates back to 1925. The defending Class AA champions are just 6-34-1 all-time against Dalton, but have won the last three and four of the last five.

Another entertaining game to keep an eye on is Archer traveling to East Coweta. The Tigers have plenty of firepower and are looking to get quarterback K.J. Parmer more experience before Region 8-AAAAAA play begins.

In other hot action, Class AAAA No. 1 Sandy Creek travels to Newnan, Baldwin visits Class AAA No. 1 Peach County and Class AA No. 6 Brooks County faces Valdosta, No. 7 in Class AAAAAA. Class A No. 3 ECI will square off with AAA No. 5 Washington County.