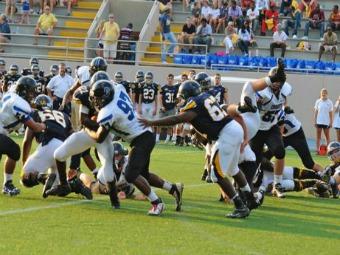 A new era of Centennial football kicked off last week as Jeff Carlberg roamed the sidelines in his first official game as Knights head coach. The former Alpharetta defensive coordinator brought with him to Centennial defensive intensity as well as the spread offense in the hopes of helping the Knights’ program break through with a deep playoff run.

The offense performed well over the summer in various 7-on-7 camps and in a recent scrimmage against Marist. Senior quarterback Chase Rosenberg is thriving in the new system, building a rapport with his receivers that should help the Knights challenge for a spot in the playoffs.

The Marist scrimmage was the first chance for the offense to really show itself against an unfamiliar foe, and Carlberg was quite pleased with how his team responded after falling behind early.

“We got off to a slow start because we weren’t playing with much aggression early on,” said Carlberg. “We were passive and not crisp. That started to change during the second quarter.”

Carlberg said he challenged the team at halftime, and the Knights responded with two scoring drives in the third quarter.

The defensive ends played well in the scrimmage, and Carlberg believes that line play will be critical if the Knights are to make a run in the playoffs. Caleb Howard, Drew Blesse, Lloyd Glenn and Lorenzo McWilliams will be looked at to pressure the opposing quarterback. Ryan Bennett should offer some leadership for the defense from his linebacker spot.

Rosenberg, Bennett’s co-captain, was on fire during the Marist scrimmage. Rosenberg passed for a pair of scores, both to standout wide receiver Christian Robinson, while throwing for more than 260 yards against the War Eagles’ defense. He also rushed for another score.

Last week, Centennial fell 42-13 to Roswell to open up the 2012 campaign as the Hornets were able to escape Ray Manus Stadium with the Mayor’s Cup. Roswell took advantage of several Centennial miscues to build an early lead. Centennial appeared on the verge of tying the game when the offense fumbled inside the Roswell 10-yard line. The fumble was one of five Centennial turnovers.

Centennial, meanwhile, was led by Cyril Teal’s 104 yards rushing. Patrick Inwood scored a rushing touchdown for the Knights, so expect to see those two offering a nice tandem out of the backfield. Rosenberg proved to be a threat with both his arm and his legs, completing 10-of-29 passes and chalking up 62 yards on the ground. Rosenberg moved the team down the field on its first two possessions to set up Devin O’Neill field goals.

While Centennial is no longer trying to pound the ball on the ground, the offensive line will still play a huge role in the team’s success. The line is anchored by senior Vincent Calhoun and sophomore Alexander Yankey, two studs up front that will look to buy Rosenberg enough time to find his receivers down the field.

Centennial has won its last three games at home and eight of its last 14 contests at The Fortress. Centennial last played Etowah in 2003, a 24-0 loss. The Knights are 1-1 all-time against Etowah.

Etowah comes into tonight’s game at 0-1 after a 14-7 loss to visiting Lambert last week. The Eagles fell behind 14-0 in the second quarter, then battled back and had a chance to tie in the waning moments of the game. A blocked punt led to Lambert’s first score, then a 75-yard completion to the Etowah one-yard line keyed the second scoring drive.

The Eagles, however, would claw back into the game during the third quarter when quarterback Reeves Johnson hit receiver Bryce Coroi on a 30-yard touchdown strike. Down just seven, the Etowah defense held for the remainder of the game. Coach Dave Svehla’s offense began one possession inside Longhorn territory late in the game, but could not hit paydirt again.

After a shanked punt went out of bounds on the Lambert 38, the Eagles drove to the Horns’ 15 but ran out of downs. Despite the loss, Etowah racked up a respectable 249 yards.

The Eagles have made the playoffs six straight years, including last year’s 6-5 campaign. Etowah is in its first year under Svehla, as former coach Bill Stewart has moved on to James Clemens High School, a new program in Alabama. Svehla arrived in the Towne Lake area of Cherokee County from El Paso, Ill., where he headed the El Paso-Gridley Titans for two years. Prior to the job in Illinois, Svehla had two different high school head coaching jobs in his home state of Nebraska.

The move to Georgia high school football brings challenges, but Svehla is used to overcoming obstacles no matter where he has coached.

“I know how good football is here, and I have coached at small schools before and at a big-time school in Nebraska before where they definitely take football seriously,” said Svehla in an interview with Score over the summer. “We all like to think we play the best football, but in the end we are coaching high schoolers. You are going to have great players at some positions and not so great players at other positions. You just find the kids that can fit your system.”

Svehla played college football at Northwest Missouri State University, a Division II program where he was a linebacker.

Svehla has brought the I-formation to Etowah, which formerly ran a veer offense. Johnson leads the offense after returning to start at quarterback. However, the senior missed much of last season due to a knee injury, and was replaced by junior John Oliver. Leading rusher Devonte Wheaton graduated, as did leading receivers Damola Awe-Olaleye and Martyn Detz. But the bulk of the offensive line has returned, led by senior guard Jakob Hassan.

The secondary is the strength of the defensive unit. Senior Michael McCauley returns after leading the Eagles with 90 tackles in 2011, and is joined by senior Pierce Blanchard and juniors Ayden Bonilla and Ben Rowell. McCauley has received interest from Ivy League schools, according to the Cherokee Tribune.

While the Eagles have been consistently competitive in the state’s largest classification in recent years, Svehla realizes his program will be challenged to make the playoffs out of Region 5-AAAAAA, which features powerhouse programs Walton and Lassiter.