Battle For I-75 Yields Big Numbers 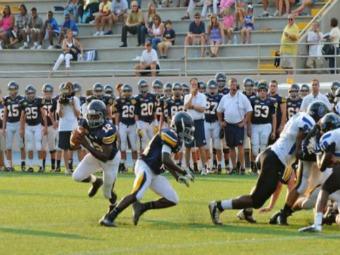 Walton's Tyren Jones had his second 300-yard game in row against McEachern in tallying 332 yards and four touchdowns on 47 carries. His touchdowns came on runs of 67, 1, 16 and 32 yards. ... McEachern sophomore Taj Griffin had a productive game of his own, rushing 10 times for 121 yards. He also scored three times. The Indians' sophomore sensation rushed for two touchdowns (22 and 23 yards) and returned a kickoff 99 yards for another.

Also at The Battle for I-75 at McEachern, Hillgrove and Lassiter totaled 517 yards through the air as quarterbacks Troy Thompson and Eddie Printz lit up the west Cobb sky. Thompson threw for 277 yards and four touchdowns in trying to lead the Hawks back from a 37-0 halftime deficit. Printz, meanwhile, did most of his work in the first half. The UCLA commit threw for 240 yards and two scores.

Sandy Creek signal-caller Cole Garvin only threw 14 passes and completed 10 of them, but totaled 214 yards and four touchdowns in his team's 52-6 rout of Banneker. Receiver Demarre Kitt caught five passes for 118 yards and two scores.

Marietta quarterback Anthony Jennings was 19-of-23 passing for 230 yards against Pope on Friday. The LSU commitment scored four total touchdowns, two through the air and two on the ground.

Marist quarterback Myles Willis threw for 71 yards and a score while also grinding out 159 yards and two touchdowns on the ground in his team's 30-13 drubbing of Clarke Central.

North Cobb's Tyler Queen threw for 239 yards and two touchdown passes to receiver Xavier Borishade of 58 and 71 yards while also rushing for two touchdowns in a 42-3 win over Starr's Mill.