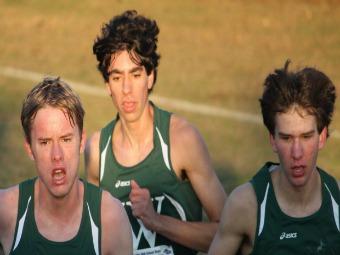 On the girls side of the UGA Bulldog Invite, Class AAAAAA No. 1 Walton won as four individual runners finished in the top 19 overall in the 23-team race. Norcross runner Katherine Yost finished in first place individually, more than 30 seconds ahead of second-place finisher Leanne Zimmer of Lambert. Class AAAAAA No. 4 Peachtree Ridge came in second in the race and Class AAAA No. 1 Marist came in third.

In the Landmark Cross Country Invitational, the Class A No. 5 Mt. Paran boys took first place ahead of South Paulding, McEachern, Our Lady of Mercy and Class A No. 2 Landmark Christian. Mt. Paran's Joey Carr won the individual title and was followed by John Raville of Our Lady of Mercy, Cory Nichols of McEachern, Caleb Teachout of Pike County and Michael Williams of South Paulding.

In the girls meet at Landmark, the top-ranked hosts took first place behind individual winner Kathryn Foreman and three total racers in the top six. Class A No. 10 Our Lady of Mercy took second, Mt. Paran took third and South Paulding took fourth.

The Class AAAAAA No. 6 Harrison girls finished fifth in the Brooks Memphis Twilight Classic on Saturday. The Hoyas were led by Elyse Bray, who came in 28th. At the same meet, the Harrison boys came in sixth. Adam Watt paced the Hoyas in finishing 28th.

In volleyball action, Class AAA No. 1 Blessed Trinity is off to a school-best 20-0 start. The Titans won the Choo-Choo Classic in Chattanooga this weekend in winning 10 matches against solid competition. Coach Paul Stevens' squad is now ranked No. 85 in the nation by PrepVolleyball.com, behind only Walton (No. 36) amongst Georgia teams. The Titans met and defeated the Class AAAAAA No. 1 Raiders 25-10, 25-22 earlier this season.

In Northview's 2-0 win over Class AAAAA No. 6 Sequoyah on Thursday, Amanda Dachs had eight kills, Rachel Rice had six kills and Kelly Rockers had 18 assists.

In the Huntsville tournament, Woodward Academy defeated Bob Jones and Cookeville, Tenn., while losing to Centennial, Tenn., Huntsville, Brentwood and Guntersville in addition to the Golden Lions. Sydney Cooper led the War Eagles in the tournament with 42 kills while Rachel Ware had 34, Lindsey Johnson had 29 and Lexie Norfleet had 28. Norfleet and Maddie McCool led Woodward Academy with six service aces. Elizabeth Muse had a team-best 31 digs in the tournament.