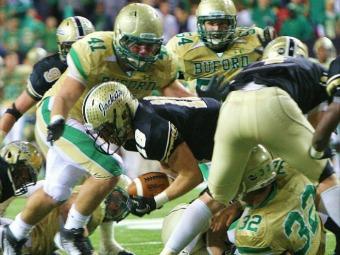 With the 2012 Metro PCS Corky Kell Classic now behind us, a full slate of high school football games is on the docket for this weekend. Four ranked teams will take part in the Battle for I-75: East vs. West, and a pair of top eight Class AAAAA teams will play on gpb.org. Across the state, some intriguing matchups will take place as teams play in some interesting non-region contests before region play kicks off.

Centennial will face Roswell after the Knights scrimmaged Marist last week. Look for the Knights to try and throw it all over the yard after finding some success in the second half last week.

Marietta looks to bounce back after a tough loss to open the season with a trip to Pope. The Greyhounds are trying to replace some serious talent that graduated, but look for Brooks Climmons to try and shoulder the load.

North Cobb travels to face Starr's Mill, and it will be interesting to see if 6-foot-1 Quinten James can run his way onto the Score 44 with a big day. The North Cobb back holds several major offers and will be the focal point of the Warriors' attack.

Marist travels to Athens to face Clarke Central. Gladiators junior quarterback Cameron Johnson is already a star and look for him to put on a show this season despite not having Quenshaun Watson to help him out of the backfield. On the other side, Myles Willis of Marist is every bit as talented, and the Boston College pledge is capable of almost anything, with the Marist coaching staff saying he is the fastest player to come through the program in quite some time.

Perhaps the game the most people will be checking repeatedly tonight on the Score Flash scoreboard is Buford at Elbert County. Buford must replace a boatload of BCS talent from last year's team that reached the Class AA finals. Elbert County will try to control the clock with running back Tyshon Dye, but don't count Buford out. The Wolves have had to rebuild before, and this effort begins with lineman Josh Cardiello and safety Jaylen Mize. The key will be at quarterback as a pair of juniors are battling to replace Sam Clay. Look for both Montgomery VanGorder and Taylor Mitchell to see time early.