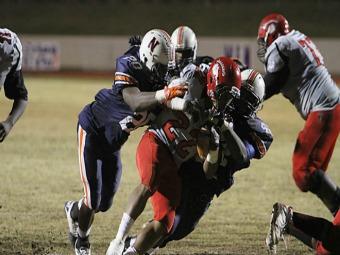 Two top 10 teams squared off Friday in Hall County when Class AAAAA No. 3 Northside-Warner Robins traveled to face No. 8 Flowery Branch. After a first half that saw the two teams feel each other out, the Northside Eagles came out firing after halftime, scoring 38 straight points to prevail 45-7.
The Falcons entered the game fired up, hoping to win Chris Griffin’s first game as head coach, and the defense showed up early on, holding the Eagles off the scoreboard on the team’s first possession. Keshun Hill finally broke through the Falcons’ 3-4 attack on a play where the defense seemingly had him stuffed in the backfield before Hill spun and juked into the end zone for a 40-yard score.
Northside would hold the lead until late in the second quarter when Flowery Branch junior quarterback Jackson McDonald found Cameron Davis for a five-yard touchdown reception to tie the game at 7-7. Northside would miss a field goal before halftime as The Branch was rocking with No. 3 on the ropes.

In the second half, Eagles quarterback Glenn Smith toted the rock from the shotgun all the way down the field before Curtis Martin finished off the scoring drive from four yards out to break the tie. Several minutes later, Smith was at it again, leading the charge down the field before he was forced to the sidelines on a helmet violation. Backup quarterback Marcus Ivory found Hill for a 19-yard touchdown on the play Smith sat out to stretch the lead to 21-7.

Flowery Branch fumbled the ball back to Northside on the first play from scrimmage after the kickoff and Donte Bryant made quick work of the drive, scoring on the first play from 16 yards out.
Hill would open up the fourth quarter with a 30-yard touchdown run, and Leortis Bradley would wrap up the scoring with a nine-yard touchdown later in the game.

Northside looked like a team that could do it all, from running to passing. Smith didn’t need to pass much in the game, but he showed several times during the game that he possesses an arm plenty capable of firing down field. Class AAAAA No. 1 Tucker is the defending Class AAAA champion after beating Northside in the semifinals last year, but the Eagles showed they are not willing to just let Tucker waltz to a title this season. Kevin Kinsler recorded win No. 24 as Northside’s head coach and he is still undefeated in regular season play. Look for the Eagles to run around, over and through the competition this season as they prepare for the postseason and a shot at redemption for last year’s early exit.