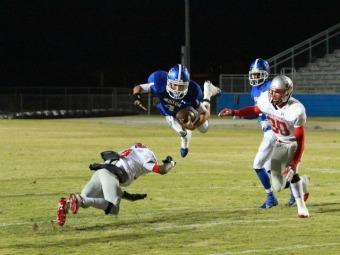 The Heritage Patriots had one of their best seasons in school history in 2011 going 10-2 and winning the Region 8-AAAA title for the first time ever. The Patriots advanced to the second round of the playoffs before being ousted by Ware County.

Head coach Chad Frazier has turned around the culture surrounding the Patriots' football program in his six years at the helm making Heritage a perennial playoff contender. Heritage loses 23 seniors from that 2011 squad, but Frazier thinks they are reloading rather than rebuilding.

"We have a very good team still," said Frazier. "We have a lot of rising seniors that are ready to step up and some exciting young players."

The Patriots, like many teams, are moving up due to reclassification and will now play in Class AAAAA. Other teams from their region, like cross-town rival Salem, are also moving up with Heritage, but the Patriots' biggest competition for the region title will come from new addition Gainesville. The Red Elephants reached the Final Four last year and return most all of their starters from that team. Heritage travels to Gainesville on Sept. 28 in a game that has big-time region title implications.

The Pats' early schedule is very difficult as they open their season against Northgate before playing against cross-town rivals Rockdale and Salem in weeks two and three. Playing their Conyers rivals that early in the season is a positive for the Patriots in Frazier's eyes.

"Playing [Rockdale and Salem] early creates excitement for the players from the beginning of spring practice through the summer," he mentioned. "The intensity level is a little higher knowing they play their rivals early."

With such a young team, the first three games will be vital to building confidence. If they can beat a playoff team from last year in Northgate and win the city championship by beating Salem and Rockdale, the Patriots would build a lot of momentum for the rest of the season. Heritage will have a tough task to repeat their 2011 success, but if they can get some early victories and give those less experienced players some confidence and swagger they could be a very dangerous team.