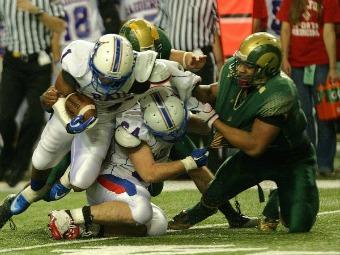 The Grayson Rams finished off 2011 with a Class AAAAA state title and a 15-0 record, and now Robert Nkemdiche and the rest of the dominating defense return to take a stab at capturing the first Class AAAAAA title. The offense must replace Nick Schuessler, but Mickey Conn will rely on his defense early in 2012. Camden County and Colquitt County check in at No. 2 and No. 3, respectively, in Class AAAAAA, and both will be on display at the 2012 Metro PCS Corky Kell Classic next Saturday. On a side note, three Cobb County programs will begin the season ranked in the Class AAAAAA top 10 as Cobb is still looking for its first state title since 1967.

In Class AAAAA, defending AAAA champion Tucker will start the season No. 1 with a new coach but a lot of returning talent. Stephenson sits at No. 2 while Northside, Gainesville and Warner Robins round out the top five. Keep an eye on Kell, which could move up in a hurry if the Longhorns win at the Corky Kell over Chattahoochee.

Burke County lost a lot of seniors from the team that won the 2011 Class AAA title, but Bears still have Donquell Green who can turn a game on its head in the blink of an eye. Sandy Creek is once again loaded and could move into the top spot if Burke County falters early. Marist is also back and ready to challenge for a state title.

Peach County and Buford each reached the state finals one year ago, though, both fell to Burke County and Calhoun, respectively. Those two sit atop the Class AAA poll with Carver-Columbus, St. Pius X and Elbert County knocking at the door.

Defending Class AA champion Calhoun will have to stay focused with a loaded Cook squad sitting at No. 2 ready to dethrone the Yellow Jackets. Also, watch out for Lovett and Dublin in Class AA.

In Class A, Savannah Christian will try to defend its title as Wilcox County, Charlton County, ELCA and Clinch County lead a host of would-be challengers for the throne. Savannah Christian shares the state's longest winning streak with Calhoun and Grayson at 15 games.

Eight of the 10 teams competing in next week's Corky Kell Classic are ranked to start the year. The field will be made up of five incredible showdowns. Kell will face Chattahoochee; Grayson meets McEachern; North Gwinnett will meet Colquitt County; Peachtree Ridge faces Camden County; finally Brookwood will meet Walton.