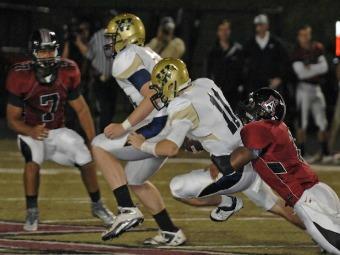 The West Forsyth Wolverines ran through the 2011 regular season to a 9-1 record, including a 5-1 mark in Region 6-AAAAA. After dropping Etowah in the first round of the playoffs, West Forsyth dominated Hillgrove 40-28, ending Kenyan Drake's high school career. After falling to Grayson just one day after Thanksgiving, head coach Frank Hepler and his staff began preparing for the 2012 season with plenty of offense but without some key defensive players.

The Wolverines' Wing T attack will once again be led by a lethal combination of quarterback A.J. Erdely and wingback Jake Wieczorek. Last season, Erdely, a Middle Tennessee State commit, passed for nearly 2,000 yards while Wieczorek ran for over 1,000 yards one season ago. Wieczorek is also a receiving threat out of the backfield.

Those two will play behind an experienced line, but they must get some help from some younger players at fullback. Blake Roberts and his 1100 yards and 16 scores last season graduated, so Hepler must turn to some combination of Trevor O'Bryant, Gabe Pierce and/or Brian Porter.

Defensively, West Forsyth has several holes to fill, none bigger than the loss of Trevor Guthrie. The former free safety was the team's leading tackler in 2010 and was voted All-County last season for his efforts. Expect linebacker Momo Camara to step in, as well as Conner Vandenbos. The two linebackers combined for nearly 200 tackles last year. Wes Rood and defensive tackle Drew Robbins will also need to be replaced.

West Forsyth's schedule includes a trip to Gainesville to open the year on Thursday, Aug. 30, followed by a pair of home games against Flowery Branch and Starr's Mill. The region slate opens up Sept. 21 with a trip to Alpharetta, the only team to hand West Forsyth a regular season loss in 2011. The Wolverines will go on the road four times in region play this season, including trips to Lambert and Chattahoochee. If West Forsyth is to advance deeper into the playoffs, the Wolverines will once again need to become road warriors as Hepler described his 2011 team.