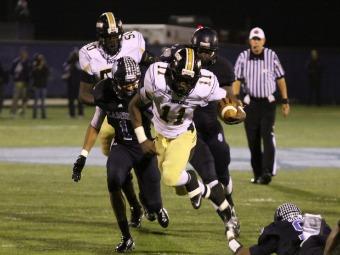 A second member of Jonesboro's receiving corps has pledged his commitment to an SEC program. Taurean Ferguson committed to Vanderbilt during spring practice and recently Cameron Sutton made his plans to attend Tennessee public knowledge. Last season Sutton played both receiver and defensive back, gathering in 31 receptions for 502 yards and nine scores while also picking off two passes. He is projected to play defense for Derek Dooley, though he could also see some time on offense.

Will Muschamp of the Florida Gators may not be sure what to make of his star offensive line recruit from Colquitt County playing some defense this season, but that is exactly what Rush Propst said would happen. According to Wayne Grandy of the Moultrie Observer, Propst said that four-star Florida pledge Octavius Jackson will be used on defense in pass rushing situations. You can check out Jackson on defense in the upcoming Corky Kell Classic, Aug. 25 at the Georgia Dome.

Lee County wide receiver Josh Cabrera has left the team after his father was transferred to a Marine base in North Carolina. Cabrera is a rising junior who already holds an offer from Duke. He made 69 catches last year for 970 yards with 13 touchdowns.

Alpharetta picked up a nice target for Elite 11 quarterback Joshua Dobbs recently. Rodney Morris has transferred to the Fulton County school from Wesleyan and will reunite with his former quarterback. Morris holds offers from Appalachian State, Elon and Western Kentucky. He will line up opposite Vanderbilt pledge Carlos Burse.

Finally, for the second straight season, one of the top rising seniors in Georgia girls high school basketball has suffered a devastating knee injury. Last year, Andraya Carter of Buford torn an ACL in her left knee but was able to return and help Buford reach the GHSA state finals. Reigning Gatorade player of the year Allisha Gray has suffered an ACL and MCL tear and will likely miss all of her senior season. Much like Carter, Gray sustained the injury while participating in US National 18U competition. Gray led Washington County to the 2010-11 state title and to the championship game last season. She has already given a verbal commitment to UNC.