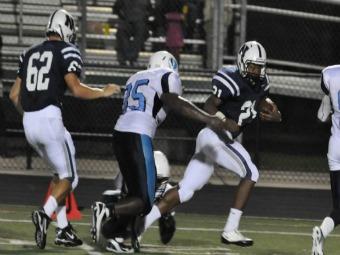 Northview has been a hard-luck program the past few years, being the smallest school in Class AAAAA. But all that changes this year as larger schools move into the new Class AAAAAA, while the Titans remain in the classification they've come to know. However, the opponents will be different this year, as will the outlook of the young program.

The program, which began in 2002, has never had a winning season, but is poised to improve in head coach Chad Davenport's third year.

"This has been the best offseason we've had since I've been here," said Davenport of his team's participation in summer programs.

The Titans look to improve on a 3-7 season in 2011 when they were a one-point loss to Centennial away from earning a postseason berth. Leading the charge in 2012 is senior running back Terrence Upshaw.

"He's our leader," said Davenport of his star back. "He's a leader in the weightroom and on the field."

While Upshaw carries the mail on the field, he also delivers in the classroom by sporting a 3.5 GPA. The mixture of football talent and academic success has impressed elite colleges like Vanderbilt and Georgia Tech, which are each recruiting him heavily. In addition to an offer from Vandy, Upshaw also has scholarships available at Buffalo and East Carolina.

"Justin has the advantage right now," said Davenport. "But they'll both play early and we'll figure out who the starter will be and go with him the rest of the year."

While Davenport isn't opposed to the two-QB system, he'd prefer to find a full-time starter.

"We'd like to narrow it down to one guy," he explained. "You're just better off when you have one (starting QB). Our goal is to find one kid who can be that guy."

In the Titans' favor this year is the schedule. While Davenport's troops were pitted against larger area schools last season like Alpharetta, Milton and Centennial, Northview will now face a hodgepodge of north Atlanta programs that were mostly in different regions last season. The new division includes Cambridge, which is in its first year of varsity football, Creekview, Forsyth Central, North Springs and Sequoyah. None of the schools in the subregion made the playoffs last year.

"All of the coaches in the subregion feel like we each have a better chance of success this year," said Davenport of Region 7A-AAAAA.

Also to the Titans' benefit is experience, as the team returns eight starters on offense, seven on defense and both kickers.

Northview has never made the playoffs in its brief history, but 2012 could be the year for Davenport's up-and-coming program.