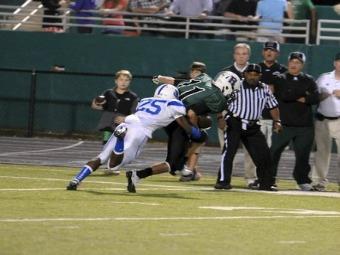 Fulton County appears to be quite top heavy in 2012, and this could lead to the most successful year in Fulton County history. That may sound like an extreme statement considering Chattahoochee won the Class AAAA title in 2010 and Roswell claimed a share of the AAAAA title in 2006, but the teams at the top are loaded and ready for all challengers.

Alpharetta is led by Elite 11 quarterback finalist Joshua Dobbs, who put the team on his back last year and will likely do so once again this season. Dobbs does have one of the state's top receivers in Carlos Burse as his main target, as well as a fine offensive line in front of him to push back opposing defenses. If Dobbs (committed to Arizona State) can find Burse (committed to Vanderbilt) enough in the postseason, and if Naim Mustaffa can bring enough pressure on the other side of the ball, the Raiders could make a serious run.

First Alpharetta must get through fellow Fulton County powers Johns Creek, Centennial and Chattahoochee. The Cougars open the year against Kell in the Corky Kell Classic and will look to ride Chase Nelson and CJ Nelson all season long. Travis Marshall should also help out the offense from the quarterback position.

Centennial also appears ready to take the next step under new coach Jeff Carlberg. The Knights will run a new spread offense and should benefit from Chase Rosenberg and Christian Robinson being on the same page all offseason.

Tri-Cities and Westlake will also provide some noise from the southern part of Fulton County. Tri-Cities has a pair of bruisers on the offensive line in Jeremi Hall and Shamire Devine. Those two should help the Bulldogs advance farther than the quarterfinals where they were eliminated last year by Northside Warner Robins.

Creekside will also be much better as the Berry twins are one year older and more comfortable in the system under Johnny White. Evan Berry plays quarterback and safety while Elliott plays at linebacker and tailback. Both should help the Seminoles improve upon last year's 5-5 record.

And perhaps the biggest mover and shaker from Fulton County this year could be Milton. The Eagles have the best defensive end in the nation NOT named Robert Nkemdiche in Carl Lawson. The future Auburn Tiger is ranked the No. 5 overall prospect in the country by one recruiting site and he isn't the only Milton Eagle with serious talent. Two members of the offensive line will suit up for Wake Forest next year and a third will play for TCU. Running back Peyton Barber will move the ball behind the line.

Fulton may not have the recent success of several other metro Atlanta counties, but the private schools dominated the scene in the 1970s. Lovett and Woodward Academy captured GHSA titles in 1970 while Westminster won one in 1971. Westminster would win another in 1978 before Woodward Academy won another two years later. Other Fulton schools to win GHSA titles include North Fulton (1966), North Springs (1969) and Roswell (1968, 70).