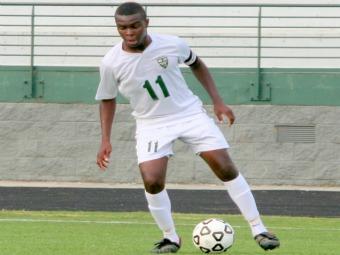 The GHSA soccer championships will be up for grabs this weekend as four boys champions will be crowned tonight and one boys squad and five girls teams will win titles tomorrow night. Some of the usual suspects are back in the title hunt while other schools are making their championship debut. The key to taking home a title may come down to several players and how they play in the various games.

Allatoona's Willough Davis has the Bucs in a position to win the school's first soccer title when Allatoona faces Columbus for the title. Davis scored a pair of goals in the semifinal win against Gainesville after going for four in the quarterfinal round.

The Bucs will be facing a tough goalkeeper in Anna Scogin for Columbus, who stopped 12 shots against Oconee County. "She played big for us," said Columbus head coach Rusty Oliver of his goalkeeper in the semifinal round.

Scogin has freshman Nikiay Comer in front of her, looking to score goals at will. Comer notched the game-winner against Oconee County.

Whitewater's Randy Hays said that his offense, led by Savannah Jordan, "gave a fantastic effort" against Union Grove. "I am so proud of them."

Jordan notched three goals and added three assists in the 6-1 win over Union Grove. She tallied a hat trick in the quarterfinals as well.

Woodward Academy's Cameron Moseley scored a pair of goals against Carrollton to push the War Eagles to the championship game. Moseley's first came late in the second half to tie the game at 2, and Moseley would score the game-winner in overtime to clinch the win.

Westminster goalkeeper Andrew Freschi saved 11 shots on goal from GAC in the semifinals to help the Wildcats make the Class AA finals. Freschi anchored the defense last year when Westminster beat GAC in the state championship game, highlighted by Freschi saving a penalty kick just 25 seconds into the game.

Connor Davis is a threat any time he is near the goal for Centennial. Davis torched Mill Creek for a hat trick in the quarterfinals, and then the senior captain assisted Kane Davis for a big goal against Parkview. Davis' presence opens up opportunities for Fischer Olliff and Cameron Bean.