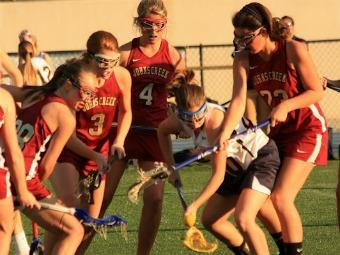 The Chattahoochee boys lacrosse team received two goals from Tommy Stanton and goals from Jack Cioffi and Grayson West, but it was not enough as Decatur edged the Cougars 6-5 in overtime. ... Pope took out Lovett 14-4 while Westminster eliminated McIntosh 13-6 in other Class A-AAAA quarterfinals action.

Lassiter spanked East Coweta 14-1 to advance to the semifinals with Alpharetta waiting. The Raiders polished off Collins Hill 16-1. Chris Katz had five goals for Alpharetta while Patrick Baldwin scored three goals. Milton and Etowah will battle in the other Class AAAAA semifinal.

Rachel Harper had four goals for Peachtree Ridge, but Alpharetta rallied from down 5-0 to take a narrow 9-8 win to advance to the Class AAAAA semifinals. Michelle Fortier scored three goals to bring her season total to 105 for Peachtree Ridge. Milton, meanwhile, dominated Mill Creek 21-3 to bounce the Hawks from the playoffs.

On the soccer field, one defending champion's repeat dream is still alive while another's crashed over the weekend. The Harrison girls took advantage of a free kick barely three minutes into its contest against Mill Creek as Jessica Sperry buried a rebound to a 1-0 advantage. Allison Leone would register a pair of saves as the Hoya defense smothered out nearly every chance Mill Creek produced.

Meanwhile the Parkview Panthers scored with just 12 seconds remaining in overtime to knock out Walton and advance to the semifinals. Abel Nguyen sent the game to overtime with an equalizer in the second half. Jonathan Jarrett also tallied a goal for Parkview.

The Allatoona girls advanced to the semifinals as Willough Davis notched all four of the Bucs' goals in a 4-0 victory.

Lindsey White of Buford recorded a hat trick in the Wolves' 9-1 win over Jackson County. Ceely Coker added a pair of goals.

The Centennial boys received a hat trick from Connor Davis to bounce Mill Creek from the playoffs. Centennial's Ryan Spence assisted on all three of Davis's goals.