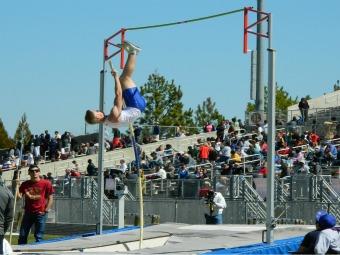 The Brookwood Broncos kept the boys Class AAAAA GHSA track & field title in Gwinnett County by capturing the program's second title in the last three years Saturday. The Broncos earned 40 team points to beat out Coffee, Mill Creek, Wheeler and Luella. Brookwood did not take home any individual titles, but earned the team title with team depth at a number of events. Tyreek Hill of Coffee won both the 100-meter dash as well as the 200-meter dash in Class AAAAA. Earlier in the weekend, Hill won the long jump event as well. His 10.44 time in the 100-meters also earned him the title of fastest man in the state.

In Class AAAA, Kell easily outpointed Sprayberry and Creekside with the early weekend efforts of Jordan Chambers. The senior took the discus crown as well as the shot put title. Devon Williams took home the 110-meter hurdles and 300-meter hurdles events for Kell.

Carrollton won its third straight Class AAA title with 58 points, 13 more than runner-up Westover. Dontrevious Ousley and Brandon Hudson got Westover off to hot starts with wins in the discus and high jump events, but Carrollton's Jonathan Jones was just getting started. Jones took the long jump event, then the 110-meter hurdles and 300-meter hurdles titles.

In Class A, Athens Christian won its second straight title and third since 2007 with a three-point margin of victory over Darlington. Athens Christian jumped out to an early lead with performances from Joseph Ruggiers (discus), Zach Lillie (high jump), Demetrius McWhorter (triple jump), Levi Cummings (pole vault) and Jordan Pickerell (shot put). Cameron Collins and Alex Cox did their best to bring Darlington back, but the early lead was too much to overcome.

Martinez Johnson of Buford won the 200-meter and 800-meter events in the wheelchair division, helping Buford to a title.