Defending Champions Pushed To The Brink 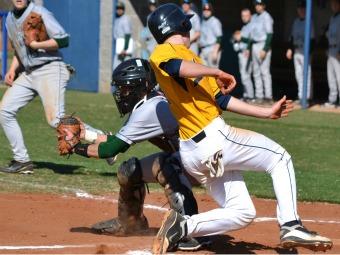 Weather played tricks with much of the action last night, but plenty of baseball and soccer was still played across the state. Mundy's Mill tasted success last week for the first time since 2008 with a win over Jones County. Now the Tigers have the two-time defending Class AAAA champion Marist War Eagles looking at an elimination game today. Corey Harmon struck out eight while allowing just two hits in Mundy's Mill's 7-0 Game 1 victory. Marist thumped Mundy's Mill 12-1 in the second game to force a Game 3.

Columbus reached double-digit runs, but it came over two games as the Blue Devils eased by Harlem 4-0 and 6-2 to advance in the GHSA playoffs. Kyle Carter fired a one-hitter with 18 strikeouts in Game 1. He just missed a no-hitter as Harlem was able to get an infield single with one out remaining in the game.

The Gainesville Red Elephants still have not lost after throttling West Laurens 15-0 and 9-3. David Gonzalez provided four RBIs in the Game 1 win.

Calvary Day didn't seem to mind the driving rain as the Lady Cavaliers whipped Brookstone 4-1 to move on in the Class A soccer bracket. Teta Alexander notched a pair of goals for Calvary Day.

Harrison's title defense is still alive after Jessica Sperry buried a shot in the penalty kick session to move the Lady Hoyas past Woodstock in the girls Class AAAAA soccer playoffs. Sperry scored in the first half for an early Harrison lead.

The Gainesville girls reached the state quarterfinals for the first time since 2005 with a 3-0 victory over Mary Persons. Mary Catherine Dempsey and Hartley Carter scored for the Lady Red Elephants in the first half, and Carter added a late goal to ice the victory.

In lacrosse news, Chattahoochee's Grayson West buried a shot with 9.5 seconds remaining to push the Cougars past Riverwood. It was the second goal for West in the second half. Tommy Stanton had a pair for Chattahoochee