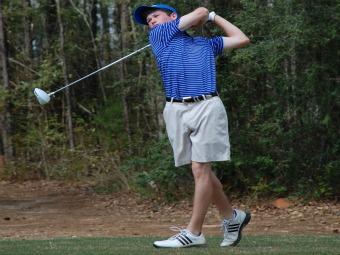 For the third straight year, a Brookstone boys golfer claimed individualist medalist honors in Class A competition as Parker Derby shot a 68 to take the title. Derby's efforts helped the Cougars beat Aquinas by 19 shots to claim the team championship as well. Brookstone's James Clark shot a 69 to help the Cougars roll to a win.

Three was also a special number for North Clayton's Mariah Stackhouse as the senior standout claimed her third individual state title in as many tries after taking home the honors as a freshman and sophomore. Last year, Stackhouse competed in an amateur tournament in preparation for the 2011 US Women's Open. Stackhouse carded six birdies and an eagle for a five-under 67 to win the Class AAAA medal.

Milton swept the boys and girls Class AAAAA crowns, but not without a touch of controversy. The Mill Creek boys posted a team score of 298, but a scoring error disqualified Dylan Pence's score of 71 and forced the Hawks to count an 83. The DQ dropped Mill Creek to sixth place, behind champion Milton, which carded a team score of 302. The Milton girls beat Cherokee by 11 strokes with Rachel Dai's 69 leading the way.

Gainesville swept the Class AAA championships as the boys edged Richmond Academy by two strokes and the girls beat out Carrollton by eight shots. Morgan Reece of Gainesville beat out Cairo's Kayla Wilbourn in sudden-death to earn low medalist honors. The boys were paced by Parks Brown's 68 to take the program's sixth state title.

Freshman Bailey Tardy helped the GAC girls to the Class AA crown as the Spartans squeaked by Vidalia 157-158. Tardy posted a first-place individual score of 73 to help GAC to its second title in three years.

The Lakeside-Evans boys came up one shot short of Class AAAA-champion Marist despite Emmanuel Kountakis' 72. Jack Larkin paced Marist with a 72. Lee McCoy of Habersham Central earned individual honors in boys Class AAAA with a 68. The Lakeside-Evans girls managed to take eek out a championship with a two-stroke victory over Lambert. Elizabeth Kim and Eunice Yi combined to shoot a 153, good enough for the win.