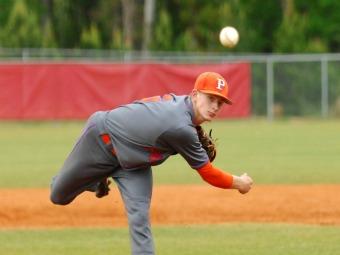 Only the mercy rule could slow down Columbus Friday night as the Blue Devils spanked Arabia Mountain 10-0 and 14-0 in a pair of contests stopped by the mercy rule. Kyle Carter crushed a walk-off grand slam to end the first game, then started Game 2 with another blast. Columbus posted a nine-spot in the second game's first inning to set the tone.

Sam Clay was dominating on the bump for Buford as the Wolves blasted Temple 14-0 in Game 1 of their best-of-three series before Austin Upshaw picked up the win in the second game, a 16-0 victory by Buford. Freshman Joey Bart tallied six RBIs in the two games, while Upshaw also knocked a grand slam in the second game.

Parkview advanced with a pair of 5-1 wins over Collins Hill. Pitchers Matt Olson and Jesse Foster picked up the victories for the Panthers. Meanwhile, Hebron Christian's Mason Felt struck out 13 Glascock County batters in a 14-1 five-inning win to finish off a two-game, first-round sweep.

Brookwood and Colquitt County each needed three games to defeat North Gwinnett and Westlake, respectively, and the Broncos will head south to face the Packers in the second round.