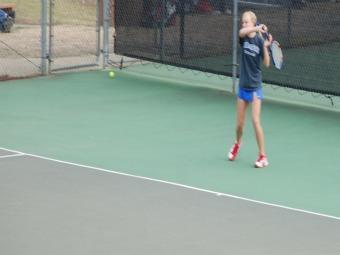 The Harrison boys golf team squeaked out its 15th straight region title yesterday, beating out Kennesaw Mountain 329-338. Sam Maryland shot a team-low 79 while Jacob Paquet chipped in with an 80 to help the Hoyas hold off the Mustangs. Kennesaw Mountain was paced by individual medalist Jonathan Keppler, who shot a 78. The boys were merely trying to keep up with the Harrison girls golf team which made it 15 straight last week. The Lady Hoyas posted a 24-stroke victory over Kennesaw Mountain as Allison Black shot an 86 to finish as individual champion, followed by teammate Hailey Willman, who shot a 90. The region crown was the first for first-year coach Dennis Attaway.

Speaking of streaks, the Walton girls tennis team extended its state-record winning streak to 157 matches with a 3-1 victory over West Forsyth in the first round of the GHSA Class AAAAA state playoffs. The Lady Raiders are trying to win a ninth straight state title. The Athens Academy boys tennis team also recently claimed its 26th consecutive region crown.

The First Presbyterian Day girls soccer team has been on fire over the last two years, racking up a 36-game in-state winning streak, a 2011 GHSA Class A title and a 17-1 record this year. The main reason for the success: defense. The Lady Vikings have posted 14 shutouts this season and had not allowed a goal since March 27 until last night. Strong Rock Christian found the back of the net for a goal, but First Presbyterian Day prevailed 7-1 to claim the area championship.

Forgive the Region 6-A girls golf champions if they cannot remember the last time they lost. Darlington, the defending Class A champions finished off a 12-0 regular season with a region crown and will now head to Augusta to seek another title. Hannah Mae Deems shot a 77 to win the individual region title while Maggie Ashmore carded an 80.

Finally, the Suwanee City Council honored William McDaniel Sr. last night at its council meeting. McDaniel or "Coach Mac" was the first baseball and basketball coach at North Gwinnett High School. In 2001 the school named the baseball field after McDaniel, who would go on to serve as principal for five years from 1969-1973. He passed away in March at 80 years of age.