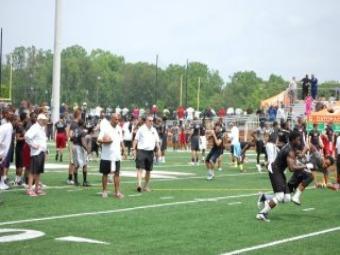 The NFTC followed the Atlanta Elite 11 regional camp where nearly 100 quarterbacks competed at Buford for a ticket to the Elite 11 finals. Marietta quarterback Anthony Jennings was named MVP of the event and earned the spot in the finals, to be held in late July in Southern California. Camden County's Brice Ramsey performed well but did not get an invitation, nor did Lassiter's Eddie Printz. University of Georgia quarterback Aaron Murray, a former Elite 11 finalist, made the trip from Athens to speak to the campers.