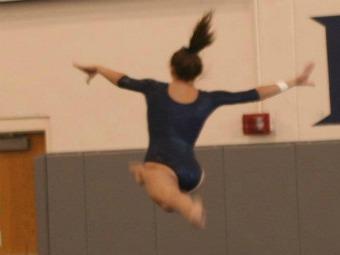 The world of Georgia high school gymnastics suffers due to lack of online resources and apathy, but one conversation with Tift County coach Jody Roberts helps to part the clouds that obscure coverage of the sport. Roberts led her Blue Devils to the 2011 state championship, the first for a south Georgia program since 2006 and only the second ever.

Roberts was a cheerleader in high school, but is raising three daughters who are very active in gymnastics.

Due to her experience with her daughters' sport, Roberts was asked to coach the Tift County varsity squad in 2010 after former coach Dede Cavanaugh tragically passed away due to a brain aneurism. Cavanaugh led the program for its first four years of existence and helped build it to where it is now. But Roberts took Tift County to the Promised Land last season. Roberts, however, is quick to pass the credit.

"We have a supportive group of parents who go to out meets," said Roberts. "And our girls all came from the Dream It (gymnastics program in Tifton). They've known each other for a long time."

Being in a region known primarily for football (Region 1-AAAAA), Blue Devils gymnastics suffers in world of obscurity outside of their own family. But the reputation of the program is quickly spreading around the state. In a meet at Lovett two weeks ago, the Blue Devils defeated Lambert and the host Lions.

Trips to metro Atlanta give the Devils a chance to experience competing with some of the top competition in the state. The Lovett meet helped out Tift County in other ways, as well.

"It is very beneficial for us to come (to Atlanta) for regular season meets," said Roberts. "It helps us know where we stand and also gives us a chance to be scored by Atlanta judges."

In a sport that is essentially graded by judges, getting used to different styles of scoring is vital to success.

This year, Tift County is led by three gymnasts who have each been Level 10 gymnasts during their careers. Level 10 is one level below Elite level, the highest echelon a gymnast can achieve.

Beth Roberts, Jodi's daughter, is one of them, as is Libby Barber. Senior Ashley McLeod was a Level 10 gymnast, but due to an unfortunate injury, is no longer considered to be that level.

This weekend, in the state qualifying meet at Lovett, the Blue Devils will attempt to qualify for the state finals meet yet again. Prior to winning the state title last season, Tift County finished fourth in 2010, Roberts' first season. This season, the Blue Devils are a good bet to advance again.