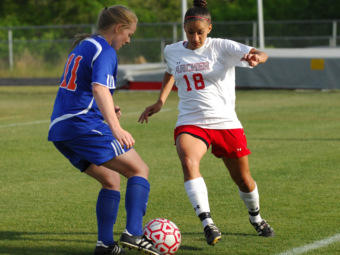 Norcross defeated Dunwoody 2-0 using a bit of Bailey power as Chase and Clay Bailey each tallied a goal for the Blue Devils. Jose Cedillo posted the shutout in goal for Norcross. Elsewhere Josh Bryan crushed a grand slam to lead Buford past Blessed Trinity 8-6 over the weekend. Sam Clay, the Buford quarterback last season, hit a home run for the Wolves. Buford improved to 10-0 in Region 6-AA play. Lanier blanked Chestatee 4-0 behind a strong pitching effort from Matthew Ramsay. Ramsay allowed just two hits while striking out six in the win.

North Gwinnett got the better of Peachtree Ridge on the lacrosse field, edging the Lions 8-6. Ronnie Adams netted three goals in the winning effort. The North Gwinnett baseball team also pulled out a squeaker against Peachtree Ridge 3-2 at Coolray Field. Tucker Baca picked up the win for the Bulldogs.

Parkview trounced Archer 8-3 on the soccer pitch. Zachary Welch matched Archer's three with a hat trick of his own. Raymond Muro also added a pair. The Valdosta baseball team tried to rally back from a 6-0 early hole but Colquitt County held off the Wildcats for a 7-5 victory. Colquitt's Aubrey McCarty knocked a grand slam to help build the early lead.

Three-sport Benedictine star Mike Huggins scored a pair of runs then drove in four on a 4-for-4 afternoon in a Benedictine 11-1 win over Islands. Huggins, just a sophomore though also a football and basketball standout, connected on a pair of doubles to help the Cadets win in the mercy rule-shortened game.

Emily Hallberg helped Mill Creek past Buchholz (Fla.) 14-6 down in Gainesville, Fla. Hallberg scored five goals while Tori Windom notched a hat trick in the resounding victory. It was the second straight win over a Gainesville power for Mill Creek after the Hawks defeated Eastside Gainesville 19-4 on Friday. Rachel Gann and Windom each tallied four goals. Noelle Allen contributed a hat trick.

Meagan May ripped the back of the net for five goals as the Colquitt County girls soccer team thumped Coffee 8-1. May now has 22 goals on the year, and the Lady Packers clinched the Region 1-AAAAA No. 3 seed with the win. Colquitt County will wrap up the regular season with three non-region matches before heading to Newnan for the first round of the state playoffs. Eurosport No. 9 Parkview was able to shutout Archer 3-0 in a Region 8-AAAAA showdown.

Armuchee finished off the regular season with a 5-1 victory over Adairsville as Meg Dunwoody recorded three goals in the winning effort. Dunwoody, Madison Poole and Erin Massey will lead the Lady Indians into the region tournament beginning today against Calhoun.