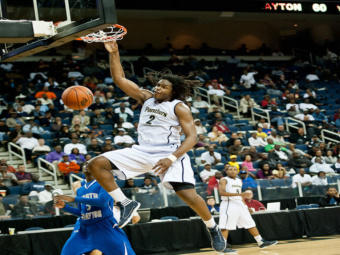 In the 35th McDonald's All-American game, two Georgia prospects joined forces just weeks after squaring off for the Class AAAA state championship earlier this month. Southwest DeKalb's Shaq Goodwin and Tony Parker of Miller Grove played on the East team, but the two could not help the East pull out the win as the West prevailed 106-102. Goodwin notched eight points but was 0-for-2 from three-point range after spending most of his time on the perimeter. Goodwin called his performance "pretty good" on Twitter. He is headed to Memphis next season where he will also look to play football.

Meanwhile, Parker finished with 10 points and seven rebounds after scoring eight in the first half to go with five first half rebounds. Parker was reportedly under the weather according to ESPN. In a piece on ESPN.com, Parker told Jason Jordan, "We weren't gonna let anything stop us from playing this game. No way."

Parker's undecided status was quite the topic last night on the broadcast and on Twitter. Could he join Goodwin in Memphis? According to reports, Tigers coach Josh Pastner visited with Parker right before the Miller Grove star left for Chicago and the McDonald's All-Star game. Various recruiting services weighed in with thoughts throughout the night. Court Cred and the AJC's Michael Carvell both think Kansas took a hit when Danny Manning was hired at Tulsa. Scott Burgess of ChicagoHoops.com and BuzzFeed's sports editor Kevin Lincoln speculated that Parker could head to UCLA along with former Central Gwinnett star Jordan Adams and McDonald's All-American Kyle Anderson. Parker told Scout.com earlier this week that UCLA, Kansas and Duke stand out above the others but within the state's borders plenty of people still hold out hope that UGA can pull off a recruiting stunner. Parker will announce his decision April 11.