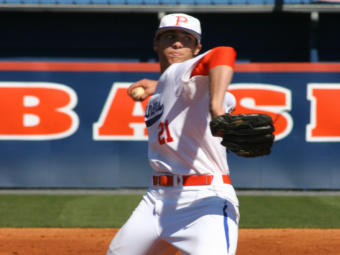 Two Georgia teams made Jim Halley's USA TODAY national top 25 list as defending Class AAAAA champion Parkview came in at No. 2 while Columbus, two-time defending Class AAA champion, checked in at No. 6. Parkview has started the season 6-2 after a recent 11-1 win over Shiloh. Reigning Gatorade Player of the Year Matt Olson is 3-0 after going five innings, recording five strikeouts. Ryan Blanton, Jeff Ronporin, Jack Esmonde and Hunter Thornton have been hot to start the season as have Rob Youngblood and Josh Hart. The Panthers have eight starters back from last year's championship squad as well as its four top pitchers. Next week, Parkview will travel to Cary, N.C., to participate in the USA National High School Invitational.

Columbus will also take part in that event as will Brookwood. Those two met on the diamond last week when Columbus blanked the Broncos 3-0. Columbus had beaten Parkview earlier in the week 7-6.

The defending Class A champs Hebron Christian has looked good early on this year, especially on the mound. Jordan Hillyer struck out 11 batters while going the distance in a 10-2 win over Prince Avenue. Hillyer drove in a pair in the win while P.J. Westbury added a pair of hits and an RBI. The Lions were 8-1 as of Monday, with a perfect 5-0 Region 8-A record. Amazingly the team had posted four straight shutouts before Prince Avenue managed to plate two runners.

St. Francis meanwhile probably feels a bit snakebitten. This season the Knights have lost five one-run games, including one that was called due to darkness. Jeff Nichols' squad has also taken three teams to extra innings, only to fall each time in eight frames. Earlier this week, despite three hits and three runs from Mark Schulte, St. Francis fell 11-7 to Riverside Military. Earlier this season, the two teams battled to a 6-6 tie that was called due to darkness. St. Francis will hope to switch up its luck with a stretch of six-straight region games before stepping out of Region 5-A in early April.

Finally, North Gwinnett and Collins Hill are used to extra frames when the two Region 7-AAAAA foes square off, but Monday saw the Bulldogs and Eagles play 10 before North Gwinnett escaped with a 3-1 win. Michael Haynes drove in the game-winning run then recorded the save in the bottom of the inning. North Gwinnett finished with 15 hits. Franklin County also edged Stephens County Monday 4-3.