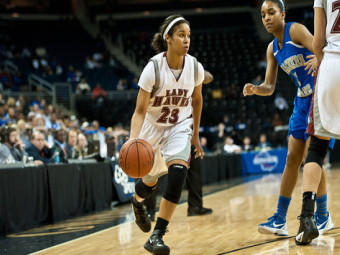 The idea of the Score 44 was to honor the best 44 senior basketball players in the state by balancing their future potential with their current effort on the court. Many of these girls carried their squads deep in the playoffs with a few taking home championships at the end of the season. McEachern went undefeated on the way to a Class AAAAA title and a top five ranking according to USA Today. Four Indians were honored on our final list including Dominique Wilson and Pachis Roberts. Wesleyan, the champions from Class A placed three seniors on the list in Jordan Frazier, Holli Wilkins and Kaelyn Causwell while Class AA champions Lovett hoisted the trophy thanks to the efforts of Christen Johnson and Tatianna Jackson. Andraya Carter returned from a knee injury and gutted through a shoulder injury to take the Buford Wolves to the championship game, and Celina Rodrigo of Hillgrove also finished her career in a championship game. The list was difficult to compile as girls high school basketball in the state of Georgia is improving by leaps and bounds each year with the level of talent rapidly improving with each senior class. Next year's list could top this year's list, but these girls all deserve the accolades for completing their senior seasons as the best in the state.