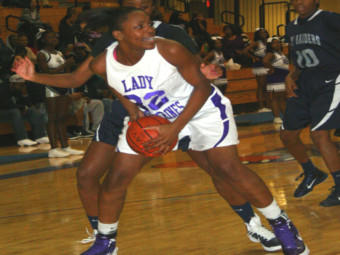 The McEachern Indians entered the season with a roster loaded full of college prospects. After opening the year with a win over two-time defending champion Norcross, the Indians climbed as high as No. 2 in one national poll. After tonight the Indians may have claim to a mythical national championship following a 69-36 win over Hillgrove to cap a 33-0 season with a Class AAAAA title. McEachern opened the game on a 20-4 run and never looked back en route to a fourth victory over region rival Hillgrove. Dominique Wilson led all scorers with 20 points while Pachis Roberts chipped in 16 and Te’A Cooper contributed 11. Celina Rodrigo did her best to keep Hillgrove in the contest with 17, but it would not be enough. Now we will wait to see if USA Today awards McEachern the title after the Indians bounced Norcross for a second time this season in the semifinals.

Miller Grove won the school’s first girls Class AAAA title with a 46-39 win over region foe Southwest DeKalb. Klarrisa Weaver led all scorers with 16 points while senior Tabitha Fudge had several key baskets to help the Lady Wolverines pull away for the win. The victory was Miller Grove’s 16th straight to end the year. Southwest DeKalb’s 19-game state tournament winning streak was also snapped with the loss. Shayla Rivers and Jasmine Coleman each scored 10 for the Lady Panthers.

The Golden Hawks will meet Columbia for the Class AAA title after the Eagles dispatched Westside, Augusta 62-37. Miah Spencer was one of four Columbia players in double figures. Yaktivia Hickson and Zuri Frost each scored 12 points. The Eagles led 35-21 at the half and never looked back.