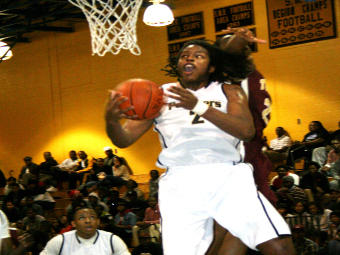 Miller Grove is after its fourth straight Class AAAA boys title, and if last night was any indication, the Wolverines appear poised to hoist the trophy. Tony Parker filled up the score sheet with 30 points, seven rebounds and four blocks, while teammate Brandon Morris registered 15 points, nine rebounds and four blocks. The Wolverines were quick all night long, sprinting on defense to contest nearly every Jonesboro offensive attempt. Miller Grove held Jonesboro scoreless for a stretch of six minutes in the third quarter to pull away.

Miller Grove will now face region foe Southwest DeKalb, a team Miller Grove has beaten three times this year including in the region championship game a few weeks back. Jordan Price scored 29 points while Shaq Goodwin dunked his way to 17 in a 74-67 win over North Clayton at the Gwinnett Arena last night. Goodwin also contributed 16 rebounds and four blocked shots. North Clayton was led by Marcus Hunt. The future Georgia Tech Yellow Jacket finished up his prep career with a 40-point effort, but it was not enough.

The girls Class AAAA finals will also match Southwest DeKalb up against Miller Grove. The Lady Panthers outworked Jonesboro 51-35 to win their 19th straight state tournament game. Jasmine Coleman and Nicole Martin each scored 12 points in the victory. Meanwhile Miller Grove advanced with a 42-34 win over Alcovy, as the Lady Wolverines' defense clamped down on the Tigers. The 34 points by Alcovy was a season low as the team had been scoring 58 per contest. Katie Hunt of Miller Grove led all scorers with 17 points while Tabitha Fudge had 12 in the win.

Athens Christian freshman DeMarcus Evans canned a pair of free throws with less than one second remaining to push the Eagles past Turner County and into the Class A finals. Demarcus Daniels scored 10 points for Turner County.

Wesleyan will have a chance at a fifth straight title and a ninth since 2002 after a 55-40 win over Taylor County. Taylor Blackmon scored 13 points to pace the Lady Wolves to victory. Holli Wilkins and Kaelyn Causwell each registered double-digits in the win.