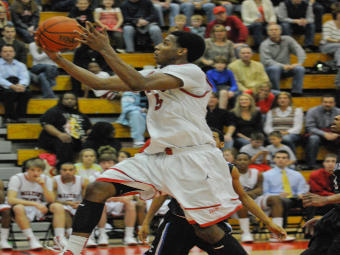 Milton has turned from perennial also-ran to one of the state's basketball dynasties under the leadership of coach David Boyd. The Eagles have made four consecutive final fours, and made the finals the last three years with one championship (2010), the only one in school history.

"It really humbles you," said Boyd in a recent interview with Score. "We appreciate the opportunity. It's never easy and we've played extremely tough competition."

Last season, the Eagles were the prohibitive favorites to win the Class AAAAA championship, but lost a 59-55 heartbreaker to Norcross in the final. Boyd said that while he has not used that game as motivation, the team's mantra this season has been to "finish the drill".

"We talked about finishing the drill, unfinished business. But it's a different year, different team," said Boyd. "A couple of our guys who were involved in that game may have used it (as motivation), but we haven't."

Speaking of veteran players, Milton's seniors have had remarkable success during their careers. The Eagles have six seniors on their rosters, but not all of them have been at Milton for all four years. But the guys who have spent their entire careers at the North Fulton school have done nothing but win.

"Our seniors have been tremendous," said Boyd. "They've won 109 games in four years and been in three straight finals. They could be great."

Unfortunately for Boyd and the Eagles, one of those seniors cannot play in the final four. Charles Mann, a Georgia signee, is suspended for the next two games after being ejected from the 80-58 quarterfinal win over North Gwinnett. Mann was ejected after drawing two technical fouls in one game, which is grounds for automatic ejection according to GHSA rules. The calls, especially the second one, have been widely criticized. The second call is now featured on video at youtube.com (link below) and in a story on yahoo.com due to its controversial nature.

"I thought it was horrible," said Boyd of his player's ejection. "Horrible. Both were poor calls. The first one should've been a double foul and the second, he just stared at the guy. I mean, c'mon!"

In the semifinals the Eagles will face Harrison, a Cinderella story out of Cobb County. The Hoyas were just the No. 3 seed out of Region 4, but Boyd has seen them coming for some time.

"They've been building for 3-4 years," said Boyd about the Hoyas. "They're a senior-oriented team that has played a tough schedule."

And after last year's upset in the final, you can be sure the Eagles will not overlook anyone.

The semifinal will take place in Gwinnett, where the Eagles have been a mainstay in recent years. While winning in the semis the past three seasons, Boyd's bunch has lost two of three in the finals.

"They have all been good memories," said Boyd of his team's history in The Arena at Gwinnett. "The semis have been (good), but the finals haven't always been."