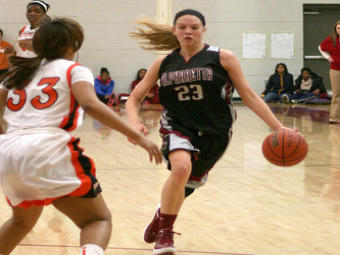 Class AAAAA was unchanged after all of the top ten girls teams won and won with authority. No. 4 Norcross will face No. 7 Marietta, and with a win the Blue Devils could move up in the poll. Norcross looks every bit like a team that is coming together at the right time. Osborne moved into the Class AAAA rankings after a ten point win over Redan in the opening round of the playoffs. Douglas County was dropped out of the rankings after falling in the first round to Chamblee. Class AAA saw a real shakeup after Mary Persons, St. Pius X and Cartersville were all sent packing from the playoffs. Crisp County, Troup and Sandy Creek all moved into the rankings. In Class A, the No. 1 team entering the playoffs Calvary Day was shocked 66-64 by Greenville, dropping them from the polls. Wesleyan meanwhile flexed its muscles to the tune of an 83-26 win to jump back into the top spot. Wilkinson County also lost and was replaced by Towns County in the top ten.

The top four teams in boys Class AAAAA all claimed victories, meaning no change at the top. However Westlake dropped Tift County on the road, thus the Blue Devils were bounced out, and Johnson-Savannah was removed from the rankings after Harrison ushered the Atom Smashers quickly from the postseason. In Class AAAA, Rockdale County's 77-73 road win moved the 2011 state finalists back into the top 10 while Loganville also moved in after soundly defeating Creekview. Crisp County entered the rankings after posting a 78-75 win over Veterans. The 78 points scored were the most scored outside of Columbia's 84 in the first round in Class AAA. All of the top 10 teams in Class AA won; however, Albany jumped Morgan County after Albany cracked triple digits in the first round. Finally, North Cobb Christian fell from the No. 2 spot after falling to St. Francis in the first round of the GHSA playoffs. Wilcox County forfeited its opening game of the playoffs and ended its season out of the rankings.