Jones Running Towards A Bright Future 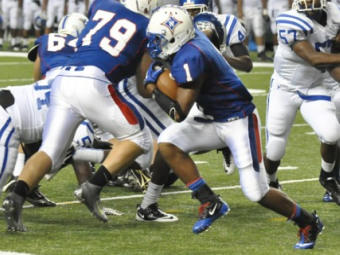 Tyren Jones certainly knows success. As a freshman, Jones helped the Lassiter Trojans to an undefeated regular season and the first region championship in school history. After a pair of wins to open the postseason, the Trojans fell to Colquitt County in the third round. After helping Lassiter back to the postseason as a sophomore with a new coach and new QB under center, Jones left for region rival Walton, where he immediately became a star. Unlike Lassiter’s spread attack, Walton featured more of a traditional offensive attack with the running back getting plenty of touches. As a junior, Jones helped Walton to an undefeated regular season, a region title and an appearance in the state championship game against Grayson.

Jones finished the year with 2,375 yards and 38 touchdowns, which was good enough to earn the notice of plenty of college coaches. Nick Saban, who has made it a habit to snatch as much Georgia talent that he can get, offered Jones recently during an unofficial visit. Jones thought about the offer and then accepted a few days later. The Score 24 2Look4 talent is among the candidates to be the No. 1 running back prospect in the state for the Class of 2013. Jones stands 5-foot-8, 192-pounds, but has great speed and can absorb a hit, as he proved all season long en route to the Georgia Dome for the state finals.

If Jones again rushes for 2300+ yards and 30+ touchdowns, Alabama fans may soon be reminded of another sub-5-foot-10 back that lit up Saturday afternoons in Tuscaloosa for a few seasons in Mark Ingram. The Tide’s first Heisman Trophy winner was the No. 189 player in the country when he committed to Alabama (Jones is No. 137) and he was 195-pounds (Jones is 192). Expect Jones to get plenty of touches this year as Walton tries to win the last game of the year in the Georgia Dome. It has been a wild few months for Jones with a state title appearance and an Alabama commitment. Look for Jones to keep the ride going next year and beyond.