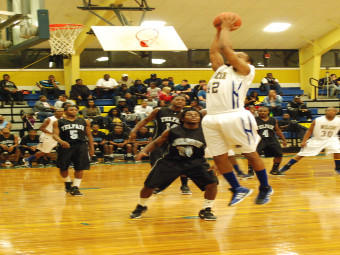 The Mt. Pisgah Patriots completed the most impressive stretch in its history after defeating Wesleyan for just the second time ever then taking out Providence Christian in double overtime 64-54 to win the Region 5-A title. Freshman point guard Aaron Winchester hit a 10-foot shot to beat the buzzer in the first overtime period before the Patriots pulled away in the second OT. Kyle Sloter, who will head to Southern Mississippi to play football, was named first-team All Region for the third year in a row, and he was huge against Wesleyan, pouring in 20 points including 5-for-6 from three-point range.

Diamond DeShields appears to be healthy again as the Norcross junior tallied 24 points in a 53-38 win over North Gwinnett in the Region 7-AAAAA championship game. Norcross outscored North Gwinnett 17-2 in the fourth quarter. The Bulldogs received 25 points from junior Lexie Brown, who was saddled with foul trouble for much of the first half.

It was a special night for North Cobb boys coach Terry Gorsuch. The Warriors defeated South Cobb 70-52, giving Gorsuch his first region title in 13 seasons with the program as well as his 200th career victory. North Cobb will face the Bradwell Institute in the first round of the playoffs.

Allisha Gray was at it again for the Washington County Hawks, scoring 30 points as the defending Class AAA champs won their third straight region title. The Hawks are now 27-0 on the year and have won 59 straight.

All good things must eventually end, and Wilcox County found that out the hard way. The three-time defending Region 2-A champions fell in the title game 48-44 to Lanier County. Wilcox County led for most of the game, allowing the Bulldogs to seize control with a little more than three minutes to play in the fourth before Malik Kone finished off the Patriots with 16 points.