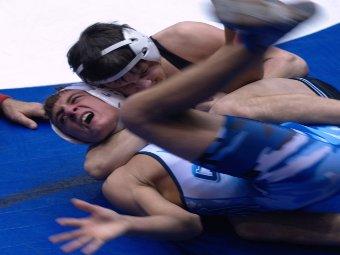 Class AAAAA power Collins Hill is still seething about its tiebreaker loss to Camden County in the dual championships. The Eagles had won the previous four dual titles prior to this year and have won four straight in traditional-style grappling. Collins Hill qualified nine wrestlers for the state tournament this weekend, while Camden County has 13 wrestlers participating. That gives the Wildcats a big edge heading into the meet. Meanwhile, Archer qualified 12 wrestlers from its young program that is in just its third year of competing.

In Class AAAA, Pope is coming off its first dual championship ever and is threatening to win its second traditional wrestling title in a row. The Greyhounds qualified seven wrestlers for the state meet, which is the most in the classification. However, Loganville will have six wrestlers competing, while Alexander brings five. Both teams will be in the mix with Pope for state gold.

Gilmer has emerged in Class AAA as a virtual monopoly after winning three of four traditional state titles and three straight in dual wrestling. The Bobcats will wrestle nine athletes in Gwinnett. Meanwhile, Carrollton qualified 10 for the state championships. The best hope from metro Atlanta in Class AAA may be Woodward Academy, which qualified eight for the state meet.

The Jefferson Dragons have won a traditional state title every year since 2001 and are the heavy favorites this weekend in Class AA. The Dragons qualified 13 wrestlers, including seven sectionals champions for the state meet. Lovett and Greater Atlanta Christian, however, each figure into the mix. Both teams qualified 11 wrestlers and could potentially upset Jefferson for the state title.

When Jefferson moved to Class AA in 2009, it was a great day for Bremen. The Blue Devils have won each traditional state championship since then. However, Holy Innocents’ pulled off an upset in the dual championships in January and look to be Bremen’s biggest threat in Class A. The Golden Bears qualified the most wrestlers in Class A with 12, while Bremen brings nine. Gordon Lee qualified 10 and could figure into the mix as a stiff challenger. Also, Spencer Jones of Darlington is attempting to win his fourth state championship in a row. Jones would become just the 24th wrestler in state history to accomplish the feat.