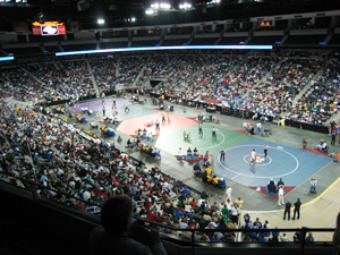 The Arena at Gwinnett Center has been home to world class entertainment since its opening in 2003 and will once again play host to the 2012 GHSA State Wrestling Championships from Feb. 16-18. Top acts from across the country, including Coldplay, Red Hot Chili Peppers and Kanye West, and major sporting events, including the 2010 SEC Women's Basketball Tournament and several live World Wrestling Entertainment broadcasts have utilized the arena.

The arena is currently home to Arena Football's Georgia Force and the East Coast Hockey League's Gwinnett Gladiators. During the 2011-12 NCAA Basketball season, the Georgia Tech men's and women's teams have played home games at the arena. Wrestling isn't the only high school sport to crown state champions at the Gwinnett Arena, as the GHSA Basketball State Championships have also taken place here since 2004. Despite being more intimate than many major arenas across the country, Gwinnett Arena still possesses a knack to reel in some of the nation's biggest entertainers and sporting events.

In order to prepare to host the state's biggest high school wrestling tournament, the arena must undergo a significant facelift so that the entire floor can accommodate several matches going on at the same time. As noted earlier, the arena is home to the Gwinnett Gladiators, which means that there is a hockey rink underneath the arena floor. The majority of the hockey surroundings must be taken down, as the glass and dashers must be removed in order for the mats and scorers' tables to be installed on the floor. One of the penalty boxes is removed in order to create access to the dressing rooms and training rooms and the other penalty box stays intact for media space.

A large space is required as 12 mats are used on the Friday of the tournament and, as the tournament progresses, the total mats dwindle to 10 on Saturday and there are just five mats lined up in a straight line on the arena floor for the final competition. "The arena staff and a number of volunteers roll up the wrestling mats and move them back to a loading area to a tractor trailer provided by Resilite, who contribute the mats," said Gary Philips, Assistant Executive Director of GHSA. Resilite and the GHSA have a corporate partnership so that the mats can come from one organization and don't need to be acquired from the different schools competing.

Of course, one of the main challenges that arises in preparation for the wrestling championships is how to cover the permanently installed ice rink in order to avoid any issues with the ice melting or mats freezing. The ice cannot be removed during hockey season to accommodate other events, but the ice can be thinned out so that there isn't a risk of it freezing the wrestling mats. "The staff lets the ice melt slightly and they use the zamboni to suck the ice up," Philips said. By thinning the ice, there is less of a risk of the mats freezing through the insulated board that serves as a buffer between the ice and the mats. When referring to the melting process, Philips said, "It's done several days ahead of time and by taking the ice up, the transition from the competitive area to the tunnels is smooth and the floor is level." The board seals the ice and keeps it from leaking through and impacting competitions or any other event that takes place in the arena.

The overall space is large enough for the competition, but when taking into account the necessary equipment and the space needed to hold 12 mats for the Friday matches, the space ends up being a perfect fit. Along with the mats, specialized wrestling clocks from the Atlanta Takedown Association are provided and set up around the entire competition area.

Volunteers from across the state and especially in Gwinnett County, collaborate with the staff members of the Atlanta Takedown Association in order to ensure the event runs smoothly throughout the weekend. Since the tournament came to the Gwinnett Arena in 2004, the staff and volunteers have developed a routine that has made adjusting the competition area and rolling up the mats after each day of the event a smooth and quick process. "Everyone knows what has to be done and we can transition from 12 mats down to 10 and down to five without running all over ourselves," Philips said. "And overall, it's a pretty quick process."

The conversion from a hockey arena to a wrestling gym is an involved process that requires plenty of hands to ensure that there are no issues throughout the entire procedure. Without diligent workers carefully involved in every step, the risk of injury to the competitors increases, as does the risk of damage to the equipment. Staff members work meticulously in order to preserve the ice and seal it so that competition is not impacted and the mats are not affected.