Wrestling Program Not Pinned By Tornado 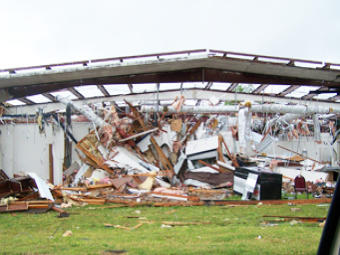 On April 27, 2011, an EF-4 tornado struck the town of Ringgold, Ga. The tornado tore through the town, leaving leveled buildings and piles of debris in its wake.

One of the hardest areas hit by the twister was Ringgold High School. While the school suffered damage and was closed for a week, the athletic facilities were even more heavily damaged according to Ringgold High School athletic director Robert Akins. He called the event something that "traumatized all of us and affected everything."

Without an adequate place to train in the offseason, the Tigers' wrestling team was forced to explore different avenues to complete their workouts this past summer. Its options were limited, but the team ended up holding their practices at neighboring Tiger Creek Elementary. While they were able to practice at the school, the Tigers weren't able to conduct their normal routine. They practiced on the mats for 30 minutes and spent the remainder of the time running the track or doing other auxiliary workouts.

While head wrestling coach David Moss and his team were practicing elsewhere, Ringgold principal Sharon Vaughn and assistant superintendent Damon Raines went to work on repairing the school's facilities. The school had to cover some of the costs but received monetary relief from FEMA, their insurance company and the community. The Ringgold community came together to help the school and produced $300,000 of donated aid.

"The community is a big reason we are in the position to be rebuilding our facilities," said Akins. "Ringgold played a huge role in rebuilding our school."

Some of the money donated from the community came from Georgia wrestling clubs. Bud Hennebaul and the Atlanta Takedown Association were one of the many wrestling associations to come to the aid of the Ringgold wrestling program. "It's like a huge brotherhood, the wrestling community is," said Moss when asked about the donations received by the community. Other programs that donated funds to the Ringgold program are the Creekview Takedown Club and the Metro Atlanta Wrestling Officials.

"Things will not be back to normal until the summer," said the Ringgold athletic director. However, the wrestling fieldhouse has been reconstructed and is being used by the team. The facility has been refurnished with new mats, lockers, desks, weightlifting equipment and other equipment required by the Tigers.

The old fieldhouse was only 10-years-old, but the new structure is a vast improvement on its predecessor. Akins called the new facility, "better than it has ever been before, I could not ask for anything better on the high school level." Moss was also very impressed with the new wrestling fieldhouse. "I want to thank everyone who contributed and prayed for us, it really means a lot." A member of one of the wrestling clubs that donated to the school, Gary Schaefer believes that the new facility is "better than anything the school has ever had, equipment wise."

Even the new wrestling facility can't replace the Ringgold wrestling program's biggest loss from last year, Adam "Tex" Carroll. Adam would have been a senior on this year's team, but was found dead with other family members in his grandmother's home in Tennessee after the tornado.

"I remember Adam as a young man who always had a smile on his face, who loved Ringgold High School with all his heart, and was loved by the students of Ringgold High School," said Moss. "The younger wrestlers did not know Adam well but the upperclassmen knew him well and they miss him."

Gary Schaefer of the Atlanta Takedown Association believes that Ringgold "has always been one of the better teams in the state when it comes to wrestling," and the school's seven state titles are an example of that. Even though this is obviously a difficult year for the program, Moss' goal is still to bring a state championship to Ringgold High School. The Tigers are 7-3 in the month of January and 20-8 overall this year. Though the team is not at the top of their region, Moss knows his team is not far from being superb again.

"(Ringgold's team) is young and resilient, and they expect to do well," said Moss. "The guys have fought real hard this season."

"This brought us closer as a team, going through this really has brought us all together" said Akins about the Ringgold tragedy. Moss echoed the athletic director's statement and believes that it has helped his team push through the season.

This weekend, three Tigers wrestlers will compete for the state championship. Sam Shepard (120), Jake Quarles (195) and Chase Orr (285) carry the banner for Ringgold, and the people of Georgia recognize that the wrestlers represent more than just themselves and their team.