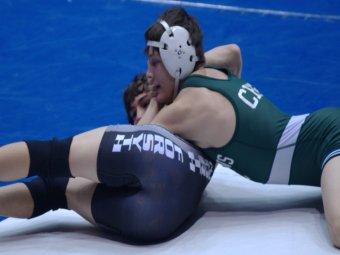 At the Area 5-AAA tournament, Woodward Academy took first place while McNair was the runner-up. The War Eagles were led by Chad Pyke, Chandler Pyke, Max Pastor and Max Wilsley, who each won their weight classes. It is the fourth consecutive region title for Woodward. Cole Waldron won the 145-pound class for third-place St. Pius X.

Collins Hill triumphed once again in the Area 7-AAAAA ahead of North Gwinnett and Meadowcreek. It is the Eagles' eighth straight region championship, and they were led by seven individual champions. Collins Hill qualified all 14 of its wrestlers for the sectionals, which are held at Tifton this weekend. Sean Russell (106), Ryan Millhoff (113), Drew Ferguson (120), Steven Bradtmueller (132), Spencer Rickman (138), Mathew Connell (160), Andre Krawulski (170).

Marist won the Area 6-AAAA title with 212.5 points, ahead of Southwest DeKalb's 165.5 and Miller Grove's 160.5. Patrick Jackson (113), Matt Andres (138) and Kenneth Brinson (195) each won for the War Eagles, while Anthony Kaigler, Corey Strickland and Gabriel Echols each won for the Panthers.