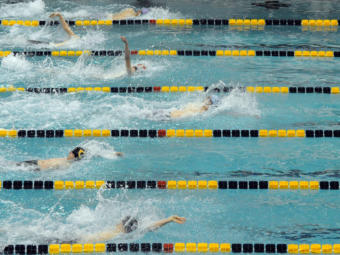 Brookwood senior Michael Trice is one of the fastest swimmers in the state as he has excelled in the 50-meter freestyle as well as the 100-meter freestyle events. The same way we point to the 100-meter dash at the Olympics as the determining race to determine the "Fastest Man Alive," the 50 free is the closest event we can use to determine the swimming sprint champion. Trice earlier this year turned in a time of 20.74, the fastest state qualifying time in Class AAAAA, bettering his time in the championships one year ago when he finished in second place. But Trice isn't a one-trick pony as he has also excelled in the 100 free and he helped Brookwood take the recent boys 200-yard medley relay at the Gwinnett County championships.

"Trice thrives on the challenge of the sprint free events," said his coach Greg Puckett. Kelsey Gouge may be just as fast on the girls side for Brookwood, as she has competed well this year in the 50 free as well as the 100 breast. Rachel Muller turned in Class AAAAA's fastest qualifying time for the 200 free. "Rachel is a very quiet individual that does so well because she is a very focused and hard working individual at practice," said Puckett.

Rick Creed is the coach of Mill Creek and he boasts a pair of swimmers that move like dolphins. Chris Powell is a name to watch out for in the boys 100 free while Rachael Dudley is a standout in seemingly every event. Dudley had the No. 1 qualifying time in the 100 fly (an event she won last year), the 100 back and has placed well this year in the 200 free and the 500 free events.

Lassiter, meanwhile, has talent oozing out all over the Trojans' roster. Jordan Drake recently took home Cobb County championships in the 100 free and 100 back as the Trojans took a 12th Cobb title in the last 13 years. According to Lassiter coach Glenn Meeden, Drake "has displayed exceptional skill at the butterfly and backstroke, but this year she also wanted to go out and show her skill as a breast-stroker." Meeden noted that winning the county title at both 100 breast and 100 free was "a huge deal for her."

The Lassiter boys have a plethora of talent too, starting with Jimmy Yoder. Much like a Swiss Army Knife, Yoder is multi-dimensional. He has turned in amazing times this year in both the 200 free and the 500 free, while also doing well in the 100 free and 100 fly. His 200 and 500 free are the fastest qualifying times in the state for those events. Zach Bunner has turned in the top times this year for 100 fly and 100 back.

Meeden said the key for both is more than just a simple desire to win. "They simply refuse to lose. They wish to be the best and at the same time, show their skill and talent in the water without bringing any attention to themselves."

Many other top swimmers will be on display at the swimming championships including Parkview's Ricky Lehner and Geoffrey Carter. Both have turned in incredible times in the 100 breast as well as the 200 IM.