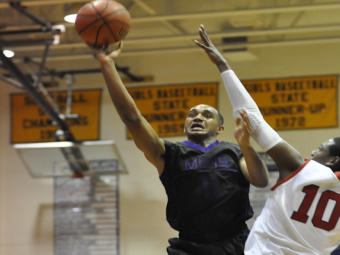 No. 1 Miller Grove managed to finish off a season sweep of the No. 5 Southwest DeKalb boys over the weekend with a 59-53 win. The Wolverines received 20 points and 15 rebounds from Tony Parker to take down Shaq Goodwin and the rest of the Panthers. UGA-commit Brandon Morris chipped in 10 points, seven rebounds and four assists for Miller Grove. The two last met back in December, with Miller Grove prevailing 57-53 in overtime.

Yonel Brown had 12 points in No. 6 Berkmar's 61-45 win over Meadowcreek, but it was A.D. Rogers and Tim Rowe each going to 15 that pushed the Patriots into the win column. Berkmar improved to 16-7 just one night after the Patriots dropped a game to Archer 70-54.

No. 3 Buford is now set for its regular season finale against GAC after disposing of Jackson 59-49. A.J. Davis has found his footing, going for 14, matching Isiah Williams in the victory.

No. 10 North Gwinnett received 23 points from Score 44 guard Chris Bolden to knock off Mill Creek 46-41. The suffocating Bulldogs defense hounded No. 4 Mill Creek into a 1-for-16 night from behind the three-point line. The North Gwinnett girls were never really challenged in a 62-39 victory over Mill Creek. The No. 4 Bulldogs nearly received a triple-double from 5-foot-9 junior Lexie Brown, who tallied eight points, eight rebounds and 10 rebounds.

Class A No. 1 Whitefield Academy faced Class AAAAA No. 7 Harrison in an inter-classification matchup that saw the Wolfpack prevail 66-57. Kenny Gaines scored 24 points to help snap Harrison's 10-game winning streak. The victory was Whitefield's 12th in a row.

Sprayberry had two players go for 21-plus points in an 87-63 win over Kell. D.J. Vereen notched 24 points and Trey Schultz chipped in 21 points in the victory. Two other players each scored 18 in the win.