McNair Comes Through With Landmark Win 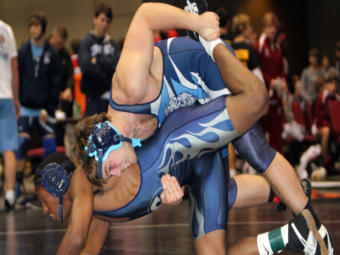 Robby Martin (138) and Quinn Peragine (113) of St. Pius X each won their respective weight classes at the DeKalb meet. Martin was awarded the 2012 William S. Venable Trophy for the Most Outstanding Wrestler in DeKalb County.

Lithonia's Anthony Smith won his second consecutive county title by capturing the 152-pound match over Stephen Wylie of Stephenson. The battle between the two was voted the Best Finals Match by the coaches. Lovett won the Elbert County Invitational Saturday as seven Lions won their weight classes. On Jan. 24, the Lions hosted Milton and defeated the Eagles 54-15.