The Role Of The Head Coach In Recruiting 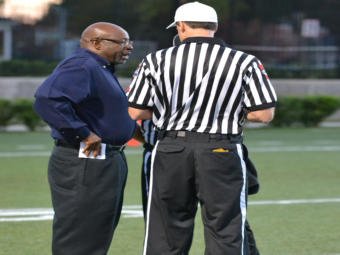 Recruiting fans and gurus like to hear about whom each recruit is favoring and what trips they will be making. But who has input into those decisions? Obviously, the players’ families and friends have a huge role in that, but so do others. One person who generally has some input is each recruit’s high school head coach.

COACHING ADVICE …
Quite a few high school players look to their head coach as a father figure. In this role, the coach provides guidance and advice to college recruits. But how much guidance do they provide and what type of advice do they usually give?

“I leave it up to the kid and the family unless they ask me questions,” said Cedar Grove head coach Ray Bonner. “I’ll give my professional opinion when asked.”

Bonner, who was head coach at Alabama A&M from 1991-1993, has seen recruiting from both sides of the coin. Bonner knows what it is like to recruit players for college and what it’s like to mentor high school recruits.

“At Alabama A&M, we would try to find out who the person was to talk to,” said Bonner, about the recruiting game. “Sometimes it was the parents, sometimes the coach or even a teacher.”

At Cedar Grove, Bonner fulfills the opposite role. Sometimes, his role entails getting exposure for players who are not wanted by the power programs.

“It’s easy when the big programs recruit a kid,” said Bonner about his role in recruiting. “But the Division II-level kids take more work.”

Both Bonner and Stone Mountain head coach Dante Ferguson have assistant coaches help them get the word out about their lesson-known recruits.

“My offensive coordinator helps me with recruiters by sending film, contact information, stats, etc.,” said Ferguson. “If they contact me, I’ll give them the information. Otherwise, my OC will handle that.”

Also like Bonner, Ferguson has been on both sides of the recruiting process and has noticed how recruiting has changed since he signed with Vanderbilt in the early 80s.

But the former Commodore tight end said that isn’t the only change in the process.

“The camps, rankings and websites were not around then,” said Ferguson. “And a lot of kids can’t afford to go to camps, which hurts them in recruiting. I think the colleges miss out on some really good players due to the rankings.”

While the process keeps changing, one thing remains the same: high school coaches have an active role in recruiting.

From a player’s perspective, there are different ways to approach the recruiting process. Some are able to make their own decision with minimal help from others, while some rely on coaches, family members or friends to help them decide.

Stone Mountain’s Markus Eligwe approached things differently than most recruits. He took the recruiting process head on, the same way the senior linebacker takes on ballcarriers.

“My parents aren’t really big into sports, so they just wanted me to get my (college) education,” said Eligwe about his recruitment. “So I pretty much handled it myself.”

Markus did eventually ask for advice from coaches, but for the most part, did the research and exploration himself. In a Tuesday interview with Score Atlanta, Markus said he didn’t come into the recruiting process with a plan or a firm idea of how it would go.

“I basically took it day-by-day,” he said. “Towards the end, I asked my coaches for advice, but in the beginning, I started looking at schools by myself.”

Markus also had a great resource available to him that many other recruits don’t possess: coaches who went through the bigtime college recruiting process.

“I asked my coaches for advice, like what they went through when they were recruited,” Eligwe said with a nod to his head coach, who played in the SEC.

While there is more than one way to skin a cat, coaches generally have at least a little influence on the recruitment of their players.