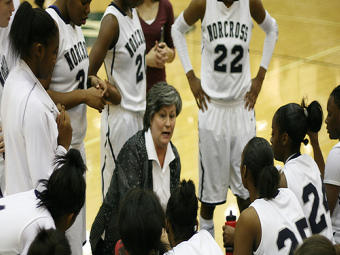 Teams are positioning themselves for various region tournaments, and this weekend will be crucial for several teams hoping to improve seeding. Luella will host Region 2-AAAAA leader Westlake as the Lions look to force a tie for the fourth seed.

North Cobb will face Hillgrove as both teams sit 7-2 in Region 4-AAAAA. The Warriors have won nine of their last 10 but dropped a 48-42 decision to Hillgrove back in December. Hillgrove has won four straight. ... Marietta hosts Etowah, looking to keep pace with Region 5-AAAAA leader Wheeler.

Milton is starting to run away with Region 6-AAAAA, but Centennial pays a visit to the Eagles, looking for a big statement and hoping to catch Milton looking ahead to Saturday. Saturday will see the Savannah boys head to Johnson in a matchup of the top two teams in 3-AAAAA. The game everyone will be excited for, though, is the Wheeler/Milton tilt in Marietta. Milton is the No. 1 team in the latest Score basketball poll. Wheeler meanwhile is coming off of a narrow victory over Walton and will be looking to bump off a team favored by many to win the 2012 state title.

In girls action, Stephenson will host Newton as both teams look to add another Region 2-AAAAA victory to their totals. No. 1 McEachern travels to face an always-dangerous Campbell squad while No. 3 Parkview travels to Berkmar, a team capable of handing the Panthers their first loss of the year.

No. 2 Norcross will be without Diamond DeShields when Mountain View pays a visit, though the Bears are just 9-9 on the season. South Gwinnett and Central Gwinnett will be battling for region tournament positioning Friday night. Saturday finds Alpharetta hosting Berkmar and Kennesaw Mountain traveling to Marietta in non-region play.