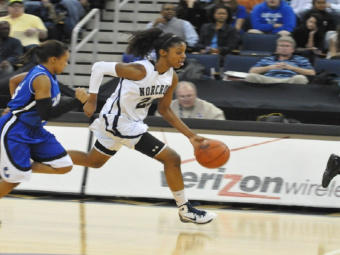 Mill Creek and Norcross will lock horns tonight at the House of Blue as the Blue Devils look to continue their recent hot streak. Norcross is 6-0 in Region 7-AAAAA play while Mill Creek enters the game 13-2 and ranked No. 4 in the latest Score Atlanta/GPB poll. Norcross is led by junior Brandon Goodwin, who has impressed thus far for Jesse McMillan. Meanwhile the Norcross girls are the two-time defending state champions and Angie Hembree's squad is the No. 2 team. Diamond DeShields will look to shut down India Dillard, Jasmine Carter and the rest of the No. 8 Mill Creek Hawks. Mill Creek is 11-5.

The Shiloh boys, ranked No. 2 in the Class AAAAA poll, host No. 10 Berkmar. Shiloh, led by Score 44 standout Robert Carter and sophomore Trayvon Reed, have dropped just one game all season, to Carver (Ala.), and the Generals look to continue their in-state dominance. The Patriots' offense starts with Yonel Brown, a Score 44 guard, and Greg Phillips' squad has won three straight, including an upset of then-ranked Archer last Friday.

The Hillgrove girls basketball team has won 12 straight games and climbed to No. 5 in the latest poll. The Hawks will host the No. 1 McEachern Indians, a team featuring three members of the latest Score 44. This will be the first of two regular season meetings between the two squads.

Another key Saturday night contest will be Qiydar Davis and the Comets of South Gwinnett hosting Marshall Guilmette and the Harrison Hoyas. Guilmette is a member of the latest Score 44 while the Hoyas enter the weekend ranked No. 8 in the Class AAAAA poll.

Class AAAA No. 1 Miller Grove is in Springfield, Missouri, where the Wolverines are in the Bass Pro Tournament of Champions. On Thursday, coach Sharman White's bunch destroyed St. Rita of Chicago 73-47 and will play Lincoln of San Diego tonight. The Wolverines raced to a 21-8 lead after one period, then extended their lead by outscoring St. Rita 19-6 in the second quarter for a 40-14 halftime lead. Forward Brandon Morris had 17 points to lead The Grove, while guard Kyre' Hamer dropped 16 points. Forward Tony Evans got into double figures with 10, while uber-recruit Tony Parker had nine. Parker, by the way, has now been offered by Kentucky, yet another big-time program hoping to land the 6-foot-9 power forward. Duke, Kansas, Ohio State, UCLA, Georgia and Georgia Tech are just some of the schools who hope to land Parker.

Class AAA No. 10 Gainesville plays a tough region game Saturday against West Hall. Both teams are in the thick of the Region 8-AAA race, as the Red Elephants boast a 5-0 region record while the Spartans are 3-2.

East Hall is in Alaska for the Alaska Airlines Classic and will face the host school, West, tonight in the second round. West High School athletics director David Williamson coached in Georgia during the 90s and was instrumental in getting Columbia to the tournament last year and East Hall this year. The same West team that East Hall faces tonight was in Atlanta over the holidays when they lost to Buford 67-29.

Class AAAA No. 9 North Clayton faces two important Region 4-AAAA duels this weekend. On Friday night, the Eagles (8-1 in the region) host Forest Park (5-4 in the region) and on Saturday they will travel to Riverdale (6-2 in the region).