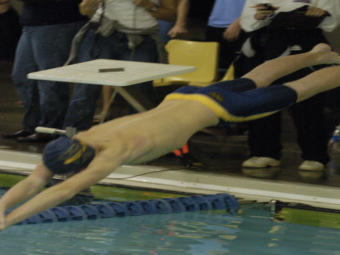 St. Pius finished third overall in the Catholic Schools Invitational with 729 points, and came in third in the boys and fourth in the girls rankings. Blessed Trinity took fifth place with 280 points while finishing fourth in the girls and fifth in the boys standings. The Golden Lions boasted individual winners in Haley Durmer (girls 100-yard breaststroke), Basil Orr (boys 100-yard breaststroke and 100-yard fly) and D.J. Boutte (boys 100-yard freestyle).

The Westminster boys dropped a home meet to Tennessee power McCallie Friday, while the Wildcat girls defeated Girls Preparatory School in the same meet. McCallie only participated in the boys meet while GPS only swam in the girls meet.

Brookwood held off Mill Creek in a meet between two of Class AAAAA’s top swimming teams Saturday. The Broncos won the boys meet 156-153 and the girls meet 155-153. Brookwood benefited from Kelsey Gouge’s performance, who won the girls 50 free and 100 free. For the Broncos boys team, Michael Trice won the 50 free and 100 free. … Alpharetta won a meet with Collins Hill and Mountain View. … Class A power Wesleyan swept a meet with Chattahoochee, from Class AAAA, and Milton, Class AAAAA. … Central Gwinnett swept a meet with Shiloh and Berkmar.