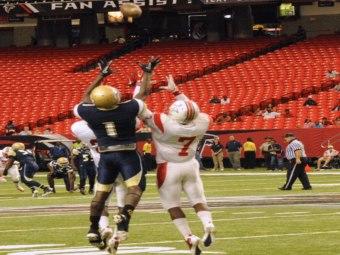 Two titans of Georgia high school football will clash Friday night in Kingsland when No. 10 Colquitt County travels to No. 1 Camden County. The Packers have made at least the semifinals the past two years while the Wildcats won state titles in 2008 and 2009 before getting eliminated in the second round last year. Colquitt County is coming off a 17-7 upset at No. 6 North Gwinnett last week in which the Packers defense shut down a formidable Bulldogs offensive attack. Rush Propst's squad forced Bulldogs QB Scotty Hosch into four turnovers. Meanwhile, Camden County has been rolling over the competition since early in the season. Coach Jeff Herron has seen his team defeat two Cobb county teams - North Cobb 34-0 and Marietta 48-7 - in the playoffs thus far. The Packers will no doubt be more competitive. In five previous playoff meetings, Colquitt County has a 3-2 edge over Camden County, with all games coming since 1994. However, in their last meeting, the Wildcats did defeat Colquitt in 2009 during their march to the state championship.

Another marquee quarterfinals showdown is between No. 4 Carrollton and No. 7 Peach County. The two traditional powers have a couple things in common as they share the Trojans nickname and both squads are on impressive winning streaks. The Trojans of the west Georgia variety have not lost since a season-opening setback at Oxford (Ala.) while the Trojans from middle Georgia have won six straight since an Oct. 7 upset at West Laurens. The two teams have wreaked havoc on Class AAA the past few years, as the power programs have combined for just two regular season losses since 2009: Carrollton's loss to Ridgeland in the season finale of the 2009 season and Peach County's aforementioned defeat at West Laurens. But despite their regular season domination, the two brands of Trojans have never met on the gridiron.

In Class A, No. 1 Savannah Christian and No. 3 Lincoln County face off in the latest edition of their growing rivalry. While the two teams didn't meet until 2009, they have played in the postseason the past two years. The Raiders won both games in Lincolnton, but tonight, the Red Devils come to Savannah. Both of these programs have their fair share of tradition, as SCPS owns seven state titles while legendary head coach Larry Campbell's program boasts 14. All of the Raiders' titles were won in GISA, but they are inching closest to their first GHSA championship having made the finals the past two seasons. Lincoln County won its last state title in 2006.